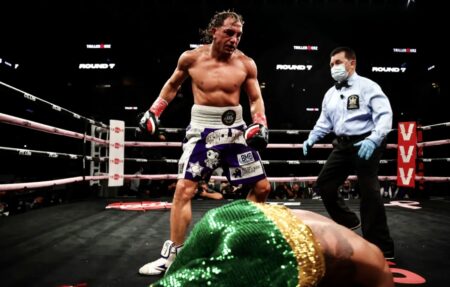 Presented by Triller Fight Club and VERZUZ, Seldin vs. Silva headlined an outstanding boxing card that preceded the Premiere of the New VERZUZ Iconz series headlined by a concert featuring music legends WYCLEF JEAN and SUPER CAT. The entire evening was broadcast and can be replayed on FITE.TV.

Tonight’s highly anticipated VERZUZ battle between BIG DADDY KANE and KRS-ONE also emanates from Barclays Center starting at 7:30 p.m. ET and will be broadcast globally on FITE.TV. Tickets for the live event may be purchased at TrillerFightClub.com.

Defending his NABA Super Lightweight Title, Seldin and Silva fought evenly throughout the first three rounds before the Brooklyn native started to take control with an assortment of heavy-handed body shots. Opening up the seventh with his typical fierce power, Seldin dropped Silva to the canvas with two battering shots to the head as referee Benjy Estevez called an immediate halt to the action.

Said a euphoric Seldin after the victory, “This was the hardest training in my life. Just a year ago I was sleeping on the floor, after three cancellations of a fight. I am 100% giving myself an A+ on this, for all the hard work and determination I had to get here.”

“We always went for body, head, body, head, and coming up with the right hand. If you go back and look at what my trainer said for that round, he said, ‘two jabs and throw a short overhand right.’ He wasn’t getting up after I landed those two big right hands.”

“The distance was close and I was able to land them. I went for the home run on that right-hand combination and got the knockout.”

Co-featured in a spirited, crowd pleasing ,ten-round super lightweight battle, Brooklyn’s Petros Ananyan, (16-2-2, 7 KOs), won a majority decision over Daniel ‘El Gallo Gonzalez, (20-3-1, 7 KOs), of Woodhaven, NY in an entertaining, back and forth clash. Scores were 95-95 and 96-94 twice for Ananyan.

Although the valiant Gonzalez did have his moments throughout the contest, the stronger Ananyan’s punches did more damage. Sensing the fight hung in the balance over the final two rounds, Gonzalez fended off as best he could the consistent onslaught from Ananyan displaying extraordinary will in not hitting the canvas. With the victory, Ananyan earned the previously vacant WBA Continental Americas Super Lightweight Title.

“This was a tough fight but I’m very happy with my performance. I’m ready now for better competition and look forward to bigger fights in the near future,” said Ananyan after the victory.

In a scheduled eight-round super lightweight fight, Will Madera, (17-1-3, 10 KOs), of Albany, NY was declared the winner via TKO over U.S. debuting Jamshidbek Najmitdinov, (17-2, 14 KOs), of Tashkent, Uzbekistan. Madera was quicker to the punch throughout the fight, scoring at will. Najmitdinov’s corner called a halt to the action after the fifth stanza following an apparent shoulder injury.

Opening the card in an eight-round super welterweight bout, Cesar ‘The Rain Man’ Francis, (9-0, 6 KOs), of Brooklyn, NY won an eight-round unanimous decision over Bayamon, Puerto Rico’s Jose ‘Cheito’ Roman, (11-1, 5 KOs). Scores were 78-73, 78-73 and 79-72. Displaying superior boxing skills combined with a relentless pace, Francis controlled the action throughout dropping Roman in the fourth round to cement the victory.