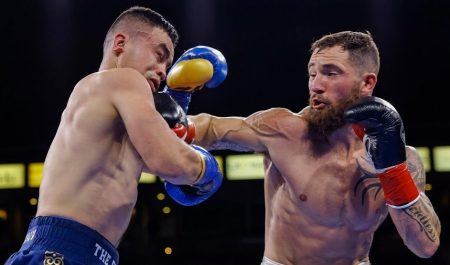 “I rate my performance a ‘B’ tonight,” said Crowley. He was a tough competitor, the former IBF No. 1 contender. I was going in the underdog, so I knew I would have to bring the fight to him the whole time. I knew that he would run and stop and pop with awkward shots. I was prepared for that.”

The action-packed fight heated up early, as Crowley landed a solid left hand in round two that appeared to buckle the knees of Abdukakhorov. However, the top-rated IBF contender Abdukakhorov was able to connect with a straight left power jab that landed flush on an unsuspecting Crowley and put him on the mat with 30 seconds left in the round.

“I have a granite chin,” said Crowley. “That was the first time I have been dropped. It’s the first time my knee has ever touched the canvas, in sparring or in a fight. But I was not hurt, and I got right back up.”

Despite the knockdown, Crowley was undeterred and continued to impose his aggressive style, stalking Abdukakhorov around the ring and peppering him with shots to the body and right hooks to the head. Abdukakhorov was able to land powerful counter punches and held a 31% to 23% lead in punch accuracy but was unable to overcome the nonstop activity from Crowley.