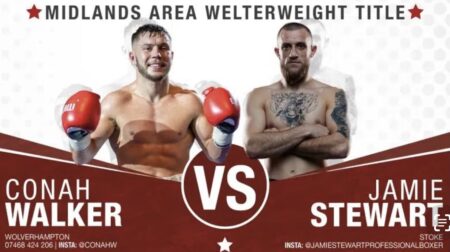 Local lad Conah Walker (9-0-1) tops the bill at the Hangar on Friday, 1st October, as he makes a maiden defence of the Midlands Area Welterweight Title he claimed back in May.

The 26 year-old defeated Levi Ferguson in a Fight of the Year Contender in Sheffield and will be looking to cement his place as King of the Midlands when he steps in with Stoke’s Jamie Stewart.

It’s a tough first defence for Walker but one that the Wolverhampton Man will be confident of overcoming as he looks to step up to English Title level and beyond.

Williams returns after more than a year out of the ring. The former Midlands and English Bantamweight Champion put in a stellar performance against Charlie Edwards last time out and will be looking to get back to winning ways and rebuild a very promising career.

Bavington meanwhile is back in action just months after her war with Sandy Ryan at Matchroom HQ in July. The Lone Wolf will be looking to get back to winning ways as she plots her own course in the pro game at super lightweight.

Super middleweight Owen is in action next weekend at Walsall FC’s Banks’s Stadium looking to build on an impressive pro debut earlier this year. The Richie Carter trained prospect will be joined, subject to BBBofC approval, by stablemate Jermaine Osbourne-Edwards.

Fellow Carter debutants – Wednesfield’s Alex Round and Cannock’s Ollie Cooper – are also set for their debut at middleweight and super welterweight respectively whilst Swadlincote super lightweight Connor Parker makes a welcome return to the ring for the first time since March 2020.