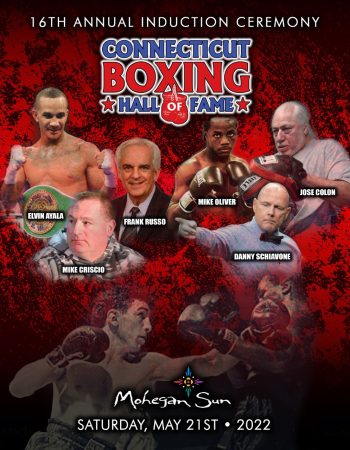 The Connecticut Boxing Hall of Fame (CBHOF) has announced its 2021 award winners to be honored at the 16TH annual CBHOF Gala Induction Dinner on Saturday night, May 21, in the Uncas Ballroom at Mohegan Sun.

East Hartford’s “Marvelous” Mykquan Williams has been selected as the 2021 Connecticut Professional Boxer of the Year. Williams could become the first CBHOF triple-crown winner having previously been the Amateur Boxer of the Year. All that’s left for the gifted super welterweight, who had a 16-0-1 (7 KOs) overall pro record entering 2022, including the WBC USNBC super lightweight title, is a future CBHOF inductee. In his lone 2021 fight, Williams won a 10-round unanimous decision over previously undefeated Yeis Gabriel Solano (15-0), who landed on the canvas in the 8th round.

East Hartford High School junior Jahnyah Lumpkin is the Ronald Roy Amateur Boxer of the Year. Lumpkin won seven of nine fights in 2021, defeating nationally ranked fighters and earning a silver medal at the National Silver Gloves Championships. Her only losses were to nationally rated opponents. A National Honor Society student who fights out of the Charter Oak Academy, Lumpkin finished fourth at the U.S. National Championships.

Attorney Jeffrey Dressler is the George Smith Contribution to Boxing Award winner. He is Charter Oak Academy Board member, as well as a member of the Connecticut State Boxing Commission, and active member of UA Boxing since 1992. He is also an accomplished ring announcer who has helped young boxers succeed outside the ring through Mega Education, the scholastic incentive system he founded.

The Will Hutt Professional Official of the Year Frank Lombardi, of Danbury, is one of the most accomplished judges in boxing. He has judged more than 600 bouts, highlighted by his judging of the first Arturo Gatti-Micky Ward fight at Mohegan Sun, which is celebrating its 20th anniversary this year, voted as the Fight of the Year by several organizations.

Earning praise for her abilities as an official is old hat for 2021 Amateur Official of the Year Heather Concepcion, whose selection for this prestigious award for the second time. As president of the Connecticut USA Boxing Committee, she was able to revive amateur boxing in Connecticut despite COVID-19 restrictions. Concepcion has managed registration, secretarial duties, chairmanship, and vice president responsibilities with Conn. USA Boxing during her career.

The inaugural Willie Pep Courage Award recipient is Jason Jakubowski for being so active in community service in the Greater Hartford area for many years. This award will be presented annually to an individual or entity throughout the community who displays extraordinary courage. He was a longtime coach in the West Hartford Youth Baseball League. Mr. Jakubowski is president and CEO of Foodshare, which distributes more than 13 million meals each year to local food pantries and community kitchens in Central Connecticut. Jakubowski oversaw the distribution of food to hundreds of thousands of individuals and families during the pandemic.

“The Connecticut Boxing Hall of Fame is so proud to announce this year’s annual award winners,” CBHOF President John L. Laudati said. “Congratulations to repeat winners Mykquan Williams and Heather Conception. Young Ms. Lumpkin is a deserving winner as is renowned boxing Judge Frank Lombardi. Few people have contributed as much to the Sport of Boxing and the youth of Hartford as Jeffrey Dressler. We at the CBHOF are especially proud to present the inaugural Willie Pep Courage Award to celebrate the 100th birthday anniversary of the legendary Willie Pep.”