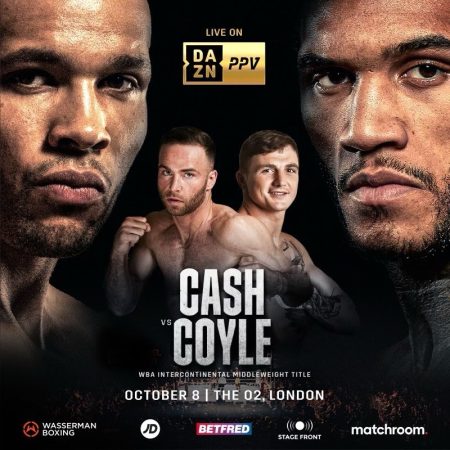 Irish sensation Connor “The Kid” Coyle will meet fellow unbeaten middleweight Felix Cash in a ten round contest for the WBA Intercontinental title Saturday, October 8 at the sold-out O2 Arena in London.

Coyle-Cash will be broadcast live DAZN and on DAZN PPV in the UK and Ireland. This exciting matchup serves as the co-feature to the grudge match between Chris Eubank Jr. and Conor Benn.

The reigning NABA middleweight champion, Coyle’s 17-0 with 7 victories by knockout. Ranked 9th in the world by the WBA, Coyle resides in Derry, Northern Ireland but trains out of Pinellas Park, FL. On September 17, the 32-year-old dominated veteran Silverio Ortiz over eight rounds. Prior to that, he scored a spirited ten round decision against Antonio Todd to capture the NABA title.

Hailing from Berkshire, United Kingdom, Cash is 15-0 with 10 KO’s. On February 12, Cash won the WBC International middleweight title by defeating previously unbeaten Magomed Madiev via ten round decision. The 29-year-old also owns impressive victories against then-undefeated Denzel Bentley via third round stoppage and Jack Cullen, who Cash halted in the 8th. The highly regarded Cash is ranked 4th by the WBO, 10th by the IBF, 12th by the WBA.

“I’m excited about this fight because the winner could be fighting for a world title in the near future,” said Coyle. “Its going to be a great night of boxing and there’s going to be a huge crowd at the O2 Arena plus all the fans watching around the world on DAZN. This fight is also close to home (Northern Ireland) for me so my fans and friends will have the opportunity to see me in the most important fight of my career.”

Coyle’s promoter, Jody Caliguire of Fire Fist Boxing Promotions, sees the Cash fight as a perfect opportunity for Connor to become recognized as a top middleweight.

“This fight is going to steal the show,” said Caliguire. “This is a huge platform for both Connor and Felix. Both fighters have undefeated records and are highly ranked but are looking for that signature victory to get their name into the world title picture. Connor’s worked incredibly hard and made many sacrifices for his boxing career. I’m confident that everybody will know who he is after October 8.”

Dubbed as “Born Rivals,” the card is promoted by Matchroom Boxing and Wasserman Boxing.