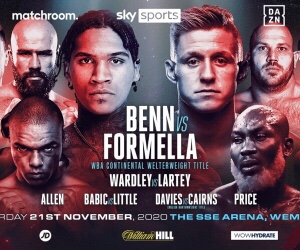 boxen247.com Will Have FULL Live Results as They Happen

Fight Notes:  Benn takes round 1. Round 2 for Benn. round 3, another Benn round. round 4 more of the same from Benn, outboxing Formella and landing some hard punches. Still Benn all the way as he takes round 5. Formella trying harder but Benn still takes round 6. Again, round 7 closer but still for Benn. Competitive round 8 but yet again for Benn. Been giving punishment to Formella and the bout is less competitive, 9 for Benn. 10 and last for Benn.

Fight Notes: Time of the stoppage was 1:22 of the 2nd round for a Wardley win.

Fight Notes: Time of the stoppage was 2:38 of round 3 after two knockdowns.

Fight Notes: Score was 60-54 for a Smith win made at middleweight.

Fight Notes: the fight was stopped by the referee between the 6th and 7th round for a Davies win.