Conway & Cissokho Clash for the WBA-Intercontinental Belt this Saturday 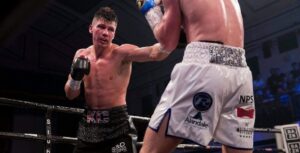 The bout will be one of the most important on the card and will bring together two rising fighters looking to take a big step in their careers and get closer to a world title shot.

Conway won the regional belt last August when he defeated Navid Mansouri by unanimous decision in Brentwood, England. The 25-year-old boxer returned to the ring in December to defeat Macaulay McGowan in a non-title fight and will now appear in the United States during one of the year’s biggest media nights and in defense of his belt.

Cissokho, who is 29 years old, will be making his first fight for a regional belt. The Senegalese native – French national has defeated some important veterans such as Carlos Molina and Dmitry Mikhaylenko, who were important tests for him.

Both will complete the various pre-fight activities during the week, and on Friday they will step on the scales to weigh 154 pounds. Conway has a record of 16 wins, 1 loss, 1 draw and 3 knockouts. Cissokho’s record is 12 wins, is undefeated and has 8 knockouts.

Natasha Jonas: I Will be a World Champion! On this Day: Salvador Sanchez Made his Professional Debut