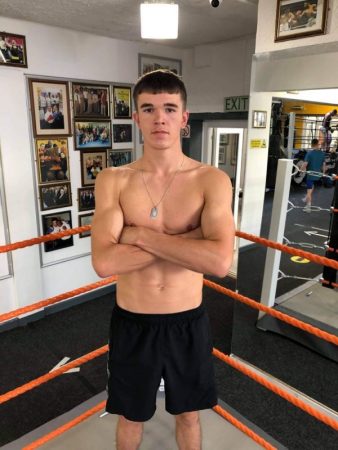 Ollie Cooper plans to settle in the middleweight division and start making noises against the bigger men at 160lbs.

He next performs on BCB Promotions’ next show in Wolverhampton, at the Hangar Events Venue (Pearson Street), on the Sunday afternoon of December 12.

His original plan was to campaign at super welter, but that has proved too much for the tall and rangy operator in boiling down to.

It was indeed a middleweight affair when his pro debut came along, taking on the super-experienced Kevin McCauley on the last Hangar card.

He had done his homework on the 42-year-old veteran, who is closing on 250 fights as a professional and rarely does not see the finish.

Cooper used his southpaw stance to establish the jab and had McCauley covering up, by the final bell, as he claimed every session of the four rounds to record a 40-36 points verdict.

The 21-year-old, from Cannock, was left reasonably pleased with the night’s work, and reckons he will show versatility when he has to come out of his shell.

The left-hander plans to move as the situation dictates, going forward, and use his guile should imposing adversaries come along.

Cooper gains more experience after a solid amateur grounding, which saw him claim two area titles and reach a national final in the England Youth Championships.

He signed off from unpaid action with 18 wins from 26 bouts, finishing up at Wolverhampton Boxing Club, where coach Richie Carter then took him into the pro ranks.

Cooper said: “It’s great to be boxing at the same place again, there was a good turn-out last time and it was a huge experience for me to perform in front of that crowd.

“I’d heard positive things about the Hangar before, but for my name to be up there in lights was a massive buzz. Now I know what to expect, I can get even more excited about it.

“Kevin (McCauley) was the perfect opponent for my debut, he’s been around the block a couple of hundred times and taught me what the pro game is all about.

“I took one look at his record, going into it, and it was obvious that I wasn’t going to knock him out, not many people do, so it was important to win every round.

“I went to work, took my time and picked my shots. It was so different from the amateurs, where two fighters go at it like bulls at a gate and rely on their fitness.

“There were things that I could have done better and I’ve learned a lot from watching the fight back, a considerable amount of times!

“I’m moving up to middleweight, which will take a lot of stress off me and I still feel strong. I’ve had lads in sparring tell me I can bang, so I’m not worried.

“It was becoming a real push to make super welter. I’m 6ft 4in, so I never found it easy, but I worked at it for weeks and only little bits were coming off. I was weighing myself, twice a day.

“I have been going over, in my head, what might happen if I end up in the ring with a naturally-bigger opponent, but I’m adaptable enough to cope.

“I’m not afraid to mix it up, which is a big part of my game. I can box at range, or stand there in the middle and scrap, whatever I need to do.

“I’ve always said that if you stick to one style of boxing, someone will always come along who can do that better than you. It’s better to change things around.”