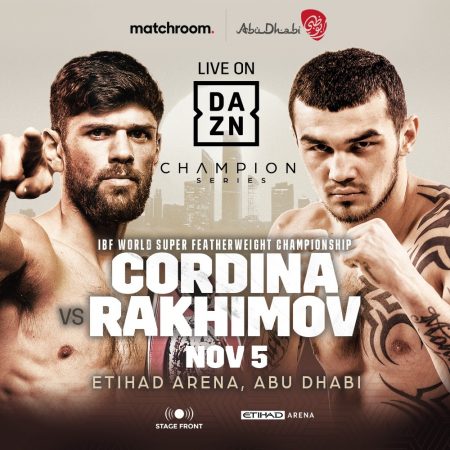 Cordina vs. Rakhimov lands on the undercard of the huge WBA Light-Heavyweight World Title clash between undefeated rivals Dmitry Bivol and Gilberto Zurdo Ramirez – Matchroom’s first ever show in the United Arab Emirates.

‘The Welsh Wizard’ (15-0, 9 KOs) captured the famous red and gold belt with a stunning one-punch knockout of Japan’s Kenichi Ogawa on a memorable night at the Motorpoint Arena Cardiff earlier this year in June to become the latest Welsh World Champion.

Tajikistan’s Rakhimov (16-0-1, 13 KOs) challenged for the vacant IBF belt against an overweight Joseph Diaz at the Fantasy Springs Casino in Indio last year – pushing the American all the way in a majority draw for the title that only he could win.

‘Shere Khan’ was presented with a second opportunity to fight for the IBF 140lbs World Title against Ogawa – but was forced to withdraw from the scheduled bout due to injury. The 27-year-old is currently the highest ranked contender with the IBF.

“Nothing has really changed since I won the World Title back in June. My mentality is still the same, I still want to be the best in the world – I want to win more titles. I’ve reached my goal of becoming World Champion but now I’ve set new goals which include becoming a unified and undisputed World Champion.

“It’s great to be a part of the first show in Abu Dhabi. I’ve been a part of some big nights in boxing – the Joshua vs. Klitschko show in front of a sold-out Wembley Stadium, Bramall Lane Stadium with Kell Brook against Errol Spence and two Joshua fights at the Principality Stadium. To be a part of another historic show is unbelievable and another one ticked off my list.”

“We have a huge night of World Championship boxing planned for Abu Dhabi on November 5 and Joe Cordina vs. Shavkatdzhon Rakhimov is the first addition to an all-action undercard,” said Matchroom Sport Chairman Eddie Hearn. “The Welsh Wizard landed the IBF Super-Featherweight World Title with an epic one-punch knockout win in his home city earlier this year but that’s just the start of the journey for Welsh boxing’s latest star. Joe has ambitions of becoming undisputed at 130lbs but first he needs to get past an incredibly tough first defence in the shape of IBF number one Rakhimov who has already challenged for the IBF crown.”