Cota & Fundora Clash in a WBC Eliminatory Bout this Saturday 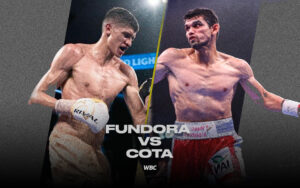 Cota and Fundora will clash in a super welterweight semi-final eliminatory bout endorsed by the World Boxing Council, to get one step closer to contesting the world crown owned by Jermell Charlo, who will defend his title against Argentine Bryan Castaño in July.