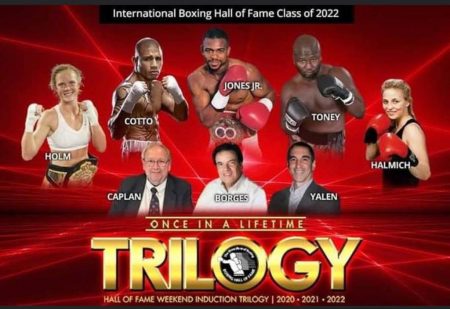 The International Boxing Hall of Fame, based in Canastota, New York, announced its picks to enter the 2022 class with Miguel Cotto, James Toney and Roy Jones Jr. in the modern men’s bracket.

Holly Holm and Regina Halmich were selected to enter the temple of immortals in the modern female category, while other personalities such as Bill Caplan, historian Bob Yalen and journalist Ron Borges also made the list.

The official induction ceremony will take place between June 9 and 12 next year and will also celebrate the inductions of the classes of 2020 and 2021, whose events could not take place at the time due to the restrictions generated by the pandemic.

Cotto, from Puerto Rico, was world champion in four categories between super lightweight and middleweight. He appeared at a time when boxing in his country needed a reference and faced the best of the best. Jones Jr. retired as one of the most impressive fighters in history and also reigned in four divisions. For his part, Toney had a career that spanned 29 years and in which he fought from middleweight to heavyweight.