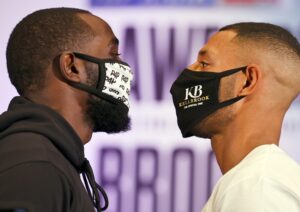 In the chief support pits Joshua Franco against Andrew Moloney.

“I’ve always felt that I’m number one pound-for-pound in the world. This is what I do. I’m not the one to quit on a fight, but I can’t say the same about him. I wish him the best.”

“I’ve been after this fight for a long time. I’m more than ready! I’m in the best condition of my life, and I’m ready to become a two-time world champion. I’m like fine wine. I’m getting better as I get older. I’m ready.”

In the co-feature — a rematch of one of the most memorable Bubble bouts — WBA super flyweight world champion Joshua “El Profesor” Franco will attempt to repeat the deed against Andrew “The Monster” Moloney. Franco upset Moloney via unanimous decision on June 23, as Moloney faded in the later rounds after suffering a pair of perforated eardrums.

“It’s great to be back in The Bubble, and now that I have the title, it is even better. I have more confidence and I’m getting better.”

“For the past five months, I have prepared myself to leave with that belt around my waist. That belt means everything to me. It’s my son’s future. I’m not leaving without it.”

The bout will air LIVE on ESPN.