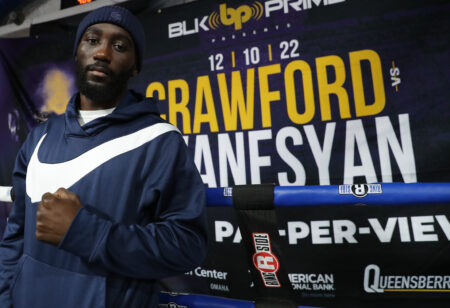 Crawford vs. Avanesyan, a 12-round WBO welterweight world title clash, will stream live on the BLK Prime app and across all cable and satellite outlets for the price of $39.99. BLK Prime, a Silicon Valley-based tech company, is a subscription video-on-demand platform that utilizes elite technology to bring the best picture-perfect stream available. The telecast will begin at 9 p.m. ET / 6 p.m. PT.

Here is what the fighters had to say Wednesday from the B & B Boxing Academy.

“Training was great, we had an awesome training camp, and pre-camp before we went to Colorado Springs. My thing is to keep doing what I’ve been doing, which is winning in a tremendous fashion, and everything else will fall into place.

“I’m getting restless thinking about Saturday, it’s a job that I’ve done for a long time and as used to it as I am, I’m still really excited about this one in my hometown. I’m sure there will be a lot of first-time boxing fans who haven’t been able to see me live, and they’ll get the opportunity to see me right in their backyards.

“My camp is like a family, when one fights, we all fight. There are four of us on this card, which is great for us, but at the same time, it gets us pushing each other that much harder. We’re able to make sure each one of us is healthy, prepared mentally and physically, and ready to go out there and perform at our best.”

“I’m going into this fight with a lot to prove as no one is giving me a chance to win, but he has a lot on his plate. He’s got a lot of distractions, and none of the interviewers ask him about me. It is always about the fight that didn’t happen or other stuff. I am more focused than ever, and coming in as a massive underdog, is just the way I like it. I was in camp already and got to extend my camp for a month or so, which was perfect. I will be the mentally stronger fighter on Dec.10th.

“A win against the #1 pound-for-pound fighter in boxing, will make one of the biggest names in the sport. I would become a household name and a top-5 pound-for-pound fighter. These are motivations, I get to take everything Crawford worked for, and I will.” Beating Terence Crawford will change my life forever. I am better than ever, and I am about to be the one that everyone in boxing talks about.”

“It’s my second boxing fight, my first was in Brazil and it was a great experience. I always like to think it’s best to keep myself ready, a fight can come up at any time, and I’m able to take on these fights because I stay ready. I’m really excited about Saturday, getting another chance in the boxing ring will be great.

“I think one of my strengths for my entire 18-year MMA career is that I am always looking to knock opponents out and I always have to defend takedowns in MMA. Now in boxing, I don’t have to worry about those takedown moves. In terms of power, I definitely have that punching power. I know the stance is different in boxing from MMA, but I always was prepared with the fight stance in MMA.”

“It’s my first fight since I tore my achilles, my first fight in 26 months. I’ve been putting an extra focus on my rest, recovery, and taking care of my body with the same level of attention as I have on my training. Being 17-0 with 14 knockouts, I’m feeling really strong going into Saturday, very prepared, and excited to defend my undefeated record against Ballard.

“I’m so excited to be back at home. After two years off, it’s going to be a special night. I’m going to make my mom proud. When my hand goes up after the final bell rings, I’ll know she’s going to be proud.

“Omaha has the best fans in the world. Whether they’re boxing fans or not, I know that Omaha will show up and show out for Bud (Terence) and me. It’s going to be a big party when the hometown stars keep the wins rolling in.

“It’s so special to be a part of the launch of BLK Prime into boxing. I feel like a pioneer, me and Bud and everyone on the card pioneered BLK Prime. It’s the first event, looking like it’ll be a sellout, it’s going to be an awesome night. I’m looking forward to it. To all the other boxers out there, BLK Prime takes care of its people, takes care of its fighters. From the negotiations to everything, even today’s media workout, it’s different from the others and they really care for their people.”