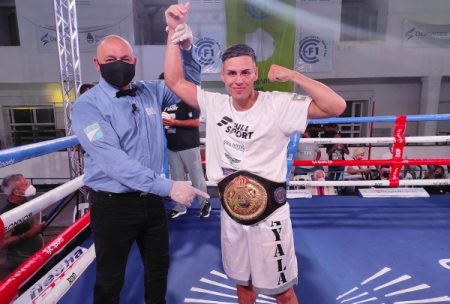 Ayala’s youth and physical fitness were noticeable from the very beginning. It was a one way fight to the surprise of the fans, who expected much more parity between Ayala and the hitherto champion and Andino, both from Argentina. A right hand to the face sent Andino to the canvas in the very first round and although he recovered he looked in bad shape.

Seeing what happened in the opening round, Ayala came out determined to end the fight in the second chapter and launched an attack to connect Andino and put him on the ropes. It was another right hand to the jaw that sent Andino to the canvas again in that round and although the referee was making the protective count, the corner decided to intervene.

Ayala showed his strength against a more experienced opponent, defeated him with ease and won the regional belt that will help him to get better opportunities in the future. At 22 years of age, he has been gradually improving and has already made a name for himself on the continental scene.