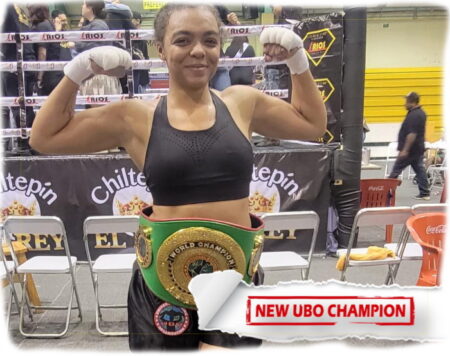 While both boxers took a rather measured approach, especially in the first half of the bout, it was always intense and competitive.

Henao at times appeared to struggle with the southpaw stance of McCoy, who worked well with the jab and was particular efficient with her straight left hand.

Two of the judges scored the fight 99-91, while the third had it 98-92, all for McCoy, who was just a little bit sharper and more aggressive in most of the rounds.

“The Black Rose” McCoy won her first title last year, the WIBA Youth, at Super Flyweight, and is quickly making her mark on the scene by continuing to prove her worth while moving up the divisions.

The new two-weight UBO world champion improved her professional record to 11-1 (3). Henao, who showed she is a very competent boxer and put up a good effort, falls to a deceiving 5-3-5 (4).

The fight was the main event of a show promoted by Rios Boxing.