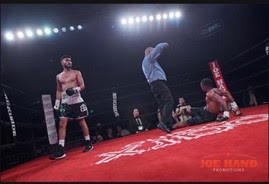 Daiyaan Butt (10-2, 5 KOs) out of Philadelphia, PA will be competing in a six-round super lightweight bout at Parx Casino® on Thursday, September 1st. Butt has experienced a lot of success at Parx Casino®, as he has gotten his hand raised every time. His last fight was a razor-thin decision loss against a tough opponent in Bryce Mills, where Butt, his team, and some observers thought he won the fight on February 24th at Live! Casino and Hotel in South Philly. I had the pleasure to speak with Daiyaan Butt and get his thoughts on the outcome of his last fight and some of the frustrations he has with the sport of boxing.

What are your thoughts on the outcome of your last fight and how do you feel?

“I thought I won, and I think 95% of the people I spoke to, even people I don’t know, thought I won. If I dwell on the past, it will wear on me for my next fight, and I can’t do that. I thought I put on a good performance, and the judges’ scoring card had me completely shocked. Body language tells you a lot. My whole corner thought I won, and when they read the score cards, I had my hands up because I thought I won. Then when they read his name, you could tell by his body language that he was surprised. I feel like they know the truth themselves. I thought I was being biased at first. I was asking my friends and people I know, and I had messages on Instagram and Facebook, etc. They were saying it was a really good fight. Some rounds were close, but they definitely thought I won, and there was no way I lost every single round. The judges said I lost every single round, which I thought was a joke. But it is what it is. You’ve just got to keep moving forward, and I feel I gained more from this loss than I thought. I literally got back in the gym the next day, my eye is all healed now, and I’m just ready to go into the next one.”

What have you learned about yourself as a person and a boxer in the last few weeks?

“I didn’t learn much. He was a tough kid, so I would give that to him. But I wouldn’t say I learned much. I know I’m a dog, and I definitely put on a good fight. And I’m not scared – I’ll tell you that. I already believed I was a dog, but it kind of showed me a little bit of the bad side of boxing, where sometimes it can’t always go your way when it should go your way, if that makes sense. So the judging system in boxing is what is making boxing a failing sport. You don’t see these types of judge score cards in a sport like MMA. There is nothing you could do about it but move on. You can’t fight the judges every fight. What made me feel better was 99% of the people I talked to thought I won, even some of the boxing writers and the guys who commentated. I’m not crazy. The promoter apologized too, and Brittany wants me back, so we are going on to the next one on September 1st.”

Is there something that you focused on improving coming into this fight?

“Just everything in general. There is always room for improvement, and you can’t ever be satisfied. I want to improve my overall game speed, power, and fundamentals and just become a better fighter.”

Are you looking forward to being able to focus on just boxing on fight week now that your school semester will be over when you fight?

“School doesn’t really play a part. I am really good at balancing my school and boxing, where at the end of the day, it’s life. You can’t have everything easy, and you have to be able to balance everything. That’s how life goes. A fight week without any homework or school is better. I can just relax or go get another workout in.”

If you have one message for the fans, what would it be?

“I appreciate all the love and support from everyone who comes out to the fight. Not everything is going to go your way, but my job is to make sure I go out and put on a good performance, fight to the best of my ability, and put on a show for everybody who comes out to watch and show support.”

Veteran heavyweight fighter Joey Dawejko (21-10-4, 12 KOs), of Philadelphia, PA, will make a triumphant return to the ring Thursday, September 1st at 7 p.m. when he steps through the ropes at Parx Casino® in an eight-round bout against Mike Marshall (6-3-1, 4 KOs) out of Danbury, CT. Dawejko, for training purposes, has been a sparring partner for former WBO/WBA/IBF world heavyweight champion, Anthony Joshua.

2014 Pennsylvania Golden Gloves Champion Karl Wylie (1-0) out of Coatesville, PA will be returning to the ring in a four-round lightweight contest.

Juan Davila (1-0, 1 KO) out of Philadelphia, PA will be competing in a four-round super lightweight bout.