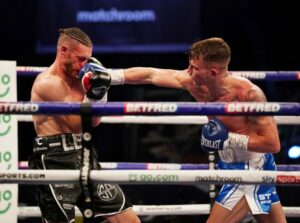 The referee stepped in with Appleyard still on his feet when Smith’s onslaught became too much, progressing the 24-year-old’s record to 8-0 (7 KO’s).

“I’ve got my first professional Title,” said Smith. “I’ve dreamt about this since I was a little boy. I’m English Champion! It’s the starting block for me. When the fight first got announced, I thought, ‘it’s just an English Title’, but now I’ve got it it’s like, ‘wow, I’m a professional Champion now’. It feels good.

“All credit to Lee – he’s one tough kid. I was prepared for a fast-paced ten rounds tonight, but he was just taking a few too many shots in there. I’m good friends with Lee out of the ring. When you go in there it’s just business. I could see his face was getting bust up pretty bad. I kind of felt sorry for him in a way. I’ve got respect for him. I knew eventually the shots would come and I knew he wasn’t going to last long.

“I’m happy with my performance. You want to win in style. The knockouts are good. We want to win but we don’t want anyone to come out of there hurt. People forget that was my eighth pro fight there. Lee is an experienced guy and he’s been in with some top kids. He’s been those championship rounds.

“I’m taking my time, I’m 24. I’ve got one shot at boxing; I want to make sure that I do it right. I’m not in there with no mugs – they’re real contenders. That was a good step up and I proved what I’m about. I’m not a championship round fighter yet. Kay Prosper just boxed for the European Title – they’re the type of fights that I want. I want to get those championship rounds in, I’m in a tough division. Maybe I’ll get over to the States in my next fight, get a bit of experience over there. I’d love to do that.”