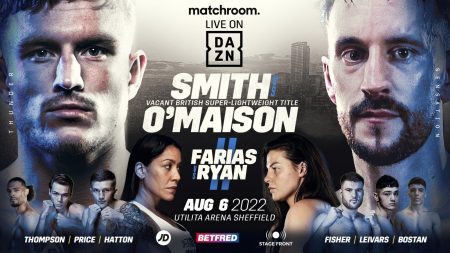 Smith (11-0, 9 KOs), one of the hottest prospects in world boxing, claimed his first pro title at Manchester Arena in May 2021 – dominating Lee Appleyard and forcing a punishing sixth-round stoppage to earn the vacant English Title.

Sheffield’s most successful amateur boxer of all time added the vacant WBA Intercontinental Title to his collection by widely outpointing Spain’s Brian Pelaez at the Worthersee Stadium in Klagenfurt, Austria four months later.

The 25-year-old halted Ray Moylette in the tenth and final round of a one-sided contest for the WBC International Silver Title at the First Direct Arena in Leeds in March before defending that belt with a sixth-round stoppage win over tough Argentinian Mauro Perouene earlier this month in Cardiff.

O’maison (17-3-1, 7 KOs), a former English Super-Lightweight Champion, shared two close contests with Luton’s Kay Prospere in 2019, drawing the first and losing the second, before returning to winning ways with a points win over Serge Ambomo in May.

Derby Super-Lightweight Sandy Ryan (3-1, 2 KOs) gets an immediate shot at redemption against Erica Anabella Farias (27-5, 10 KOs) after suffering her first defeat in the pros at the hands of the former World Champion from Argentina on the Leigh Wood vs. Michael Conlan undercard in March.

Romford Heavyweight sensation Johnny Fisher (5-0, 4 KOs) returns to the ring after recovering from a hand injury that he suffered in his points win over Gabriel Enguema in front of over 2,000 of his ‘Romford Bull Army’ at the famous Alexandra Palace in February.

Hyde Lightweight prospect Campbell Hatton (7-0, 2 KOs) fights for the third time this year after notching wins over Joe Ducker at The O2 in London in February and Ezequiel Gregores at the AO Arena in Manchester in April.

“World Championship boxing at Hillsborough’s the goal, so headlining the arena for the British Title is a great milestone along the way,” said Smith. “It’s a venue that has seen some huge fights – Naz, Nelson, Hatton and Brook to name a few. Now I feel it’s my turn.

“Sam is heavy-handed and an awkward southpaw, but I think my best beats his best so that’s what I need to deliver. It’s going to be a right atmosphere!”

“When I found out about this fight I was over the moon, becoming British Champion has been a childhood dream of mine!” said O’maison. “I know Dalton fairly well and sparred him a few times so I know this fight won’t be easy by any means, these calibre of fights never are but I 100% believe in myself. The icing on the cake for me is that it’s a Sheffield derby at the Sheffield Arena! No doubt the atmosphere will be electric knowing Sheffield supporters! Roll on August 6.”

“It’s Sheffield vs. Sheffield for the prestigious British Super-Lightweight Title on August 6 and a chance for one of the most exciting talents in world boxing Dalton Smith to headline his first ever show in his home city,” said Eddie Hearn, Matchroom Sport Chairman. “Dalton has been flawless so far in the professional ranks and I truly believe that he is a World Champion-in-waiting. He has a tough assignment against Sam O’maison and the arena is sure to be bouncing for an all-Sheffield main event. We have a host of young talent looking to make an impression on the undercard – catch it all live on DAZN.”

“Alongside the mega fights, DAZN are always looking to showcase the best up and coming talent around on our shows”, said Ed Breeze, EVP Rights at DAZN. “This card has some of the most exciting young fighters in British Boxing who are destined for the very top. This fight night is not to be missed! August 6, live worldwide on DAZN.”