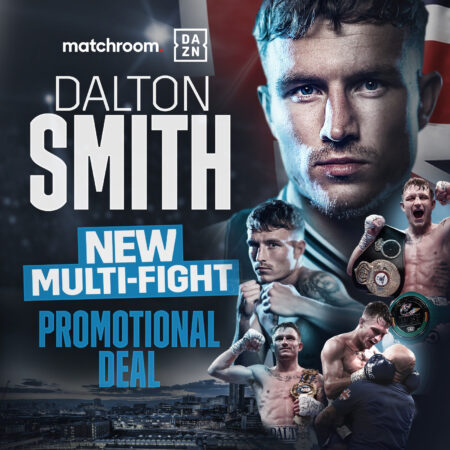 One of the hottest young properties in world boxing, ‘Thunder’ (13-0, 10 KOs) enjoyed a stellar 2022, winning all four of his fights in impressive fashion and picking up the WBC International Silver and British Super-Lightweight Titles to further cement himself as a World Champion in waiting.

The 25-year-old former amateur sensation, who is trained by his father Grant at the Steel City Gym and managed by STN Sports, kicked off the year by stopping Ireland’s Ray Moylette in the tenth and final round of their clash at the First Direct Arena in Leeds to earn his third professional Title.

Smith extended his winning streak with another dominant stoppage win against tough Argentinian Mauro Perouene in the first defence of his WBC International Silver Title on the undercard of Joe Cordina’s memorable World Title win over Kenichi Ogawa at the Motorpoint Arena Cardiff.

In what is sure to be his first headline fight of many at the Utilita Arena Sheffield, Smith landed the prestigious Lord Lonsdale Challenge Belt by outclassing and finishing local rival Sam O’maison in six rounds to collect his fourth pro title in August.

He rounded off an incredible 2022 by successfully defending his British 140lbs crown for the first time against Birmingham’s Kaisee Benjamin at Manchester Arena last month and can now look forward to an even bigger 2023 as he works towards an inevitable World Title shot.

“I’m delighted to sign a multi-fight extension with Matchroom Boxing,” said Smith. “2022 was a huge success. I was nice and active, added the British Title to the collection and headlined at Sheffield Arena.

“2023 I need to build on that by staying busy, winning the British Title for keeps and adding more Titles. I want to be closing the year selling out the arena before turning my attention onto Hillsborough and World Titles in 2024.”

“I’m delighted to extend our deal with one of the very best talents in world boxing Dalton Smith,” said Matchroom Sport Chairman Eddie Hearn. “Dalton and his team enjoyed a brilliant 2022 that saw him pick up the British Super-Lightweight Title in his first headline fight in Sheffield back in August. Some huge nights at Sheffield Arena lay ahead for Dalton as we continue to guide him towards the top of the 140lbs division and a dream fight at the home of his beloved Sheffield Wednesday.”

STN Sports Chief Executive Sean O’Toole said: “Dalton has the potential to be a leading player in one of the most exciting divisions in world boxing. This will be a massive year for the team as we build towards bringing one of the super fights to Hillsborough.”