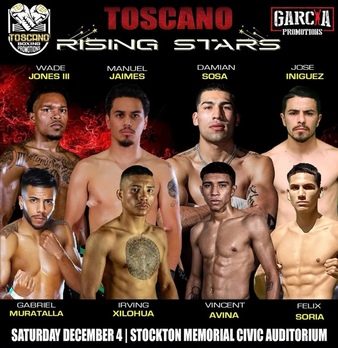 December 4th, at the Civic Auditorium in Stockton, California, Toscano Promotions present a world-class night of professional boxing that will feature rising middleweight Damian Sosa taking on the popular Clay Collard in a bout scheduled for eight-rounds.

The Non Pay-Per-View card can be seen on Toscano Promotions YouTube and TV Boxeo YouTube at 7:30 PM ET / 4:30 PM PT

Sosa of Tijuana, Mexico, has a record of 18-1 with 10 knockouts. The 24 year-old is a five-year professional, who has racked up wins against Giovanny Gonzalez (6-1), Angel Beltran Villa (9-0) and his bout when he won a split decision over previously undefeated Abel Mina (13-0) on June 19th in Guadalajara, Mexico.

Collard of Burley, Idaho became the darling of the “Top Rank Bubble Series” that took place at The MGM Grand in Las Vegas. The 28 year-old Collard has a record of 9-4-3 with four knockouts. Collard won three fights during the series over previously undefeated David Kaminsky (6-0) and Maurice Williams (7-1). Collard previously had wins over Maurice Winslow II (2-0), Du-Shane Crooks (13-1), Gerald Sherrell (10-1), Quashtown Toler (9-0) and Raymond Guajardo (5-0). Collard is looking to get back in the win column following a decision loss to undefeated Maidel Sando on February 20th in Shelby, Kentucky.

Jaimes (11-0-1, 9 KOs) of Stockton, will look to thrill his hometown fans. The 21 year-old is a three-year professional, and has impressive wins over Lorenzo Antonio Juarez (5-0), Francisco Julian Rodriguez Rubio (9-1-1) and Christian Santiago Vazquez (15-0-1). Jaimes is coming off his first blemish as he fought to a draw with Alejandro Frias on February 27th in Jalisco,Mexico.

Flores of Guadalajara, Mexico has a record of 25-4-1 with 17 knockouts. The 35 year-old Flores is a 13 year-professional.

Flores won his first 25 fights (with two no-decisions). He attained wins over Oscar Arena (19-2) & Rodolfo Hernandez Montoya (24-3-1). On April 18, 2015, Flores won the WBA Interim Super Bantamweight title with a 12-round split-decision over Oscar Escandon (24-1) in Carson, California. He made two defenses of the title with wins over Luis Emanuel Cusolito (21-1) and Paulus Ambunda (24-1). He fought to a no-contest with unified world champion Guillermo Rigondeaux. Moises lost his bid for the WBA title when he lost to Danny Roman. Flores was stopped in one by Carlos Dixon on July 2nd in Louisville, Kentucky.

There will be three more fights as part of the FITE.TV Pay-Per-View. for $14.99

Tickets for this great card are $40 can be purchased at Ticketon.com