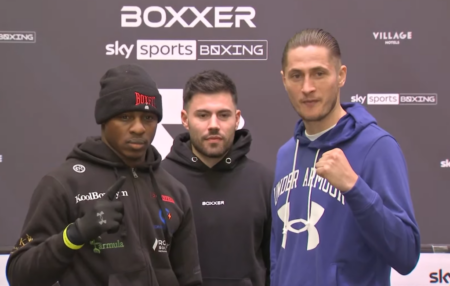 Dan Azeez, Hosea Burton and Tasha Jonas all had plenty to say as they took part in their final press conference ahead of returning to the ring this weekend.

The fighters are in action on the Boxxer event that takes place at the SSE Wembley Arena on Saturday, and will be broadcast live on Sky Sports.

Azeez said: “Everybody who knows me knows I’ve worked diligently and consistently. I’ve never been stop-start, I’ve always been training and working hard.

“I’ve gone the traditional route. I won the Southern Area, won the English and defended it a few times, and now I’ve got a big opportunity to fight for the Lonsdale belt, so I’ll take it with both hands.

“Hosea is saying he’ll be too fit for me, but that won’t be enough. Everybody I’ve fought has all had more experience than me, but it’s different when you’re in there with me, and Hosea will find out.

“It’s the right fight for me, and neither of us can afford to lose. This is Hosea’s last chance saloon on the big stage. I think I’ll get the best Hosea, and if he doesn’t bring the best Hosea he’ll be in for a long night.”

Burton said: “It’s a must win fight for me. I waited five years to have this chance again to fight for the British title. I felt I should have had the chance straight away after losing it, but it’s here now and I’m going to get the win and become a two-time British champion.

“Dan is a good well-rounded fighter. Me and my trainer Joe Gallagher work on things all the time, and we’ve watched things on Dan and we think we have his number. This will be a good fight.

“It’s a must-win fight, but it is for the two of us. No disrespect to Dan, but he hasn’t fought anybody in my league. I think I’m a step above, and I think I can win inside the distance.”

Jonas said: “I’ve spoken for a while about wanting to be active, well I got this chance and when the call came I took it. I’m happy to be here, and happy to not be in the studio criticising other boxers performances and instead working on my own.

“The big fight nights are what I want to be involved in, and it’s great to share this platform with some of the most talented boxers in the country and to see where the journey goes.”