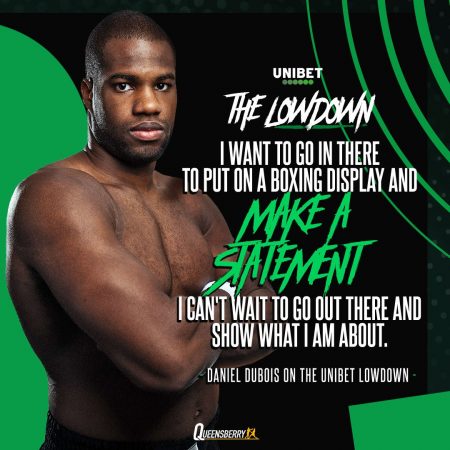 Daniel Dubois is ready to exert punishment on Trevor Bryan for keeping him waiting for his world title shot.

Dubois goes in with the American champion on June 11 with the WBA world heavyweight championship at stake, fighting for the ultimate right to take on the super champion, which is currently Oleksandr Usyk.

The 24-year-old Dubois has been out of action since August of last year when he fought Joe Cusumano in Cleveland that resulted in a first round stoppage. A vaccination issue prevented him returning to the States to fight again in December and, since this time, taking another fight would have jeopardised his mandatory rights with the WBA.

Bryan was also granted a voluntary defence of his title against Jonathan Guidry in January, which delayed the ambitions of the 17-1 Londoner and left him hard at work in the gym.

“It is about time and I have been waiting patiently for a while,” said the former WBA Interim champion, a belt he won by defeating Bogdan Dinu in June last year. “It has been frustrating so I am glad to get it on, finally.

“I will definitely take it out on him with controlled aggression, that’s what works. I want to go in there to put on a boxing display and make a statement. I have been training pretty much non-stop, I have been in the gym and the other guys have been having fights and I have just been working away, but now it is on and I can’t wait to go out there and show what I am about.”

Dubois insists he carries a much wiser head on his shoulders these days and is an improved version of himself since his only setback against home rival Joe Joyce in 2020. His sparring partner for that fight, unbeaten American heavy Jeremiah Milton, is back in London again and has detected a difference during their sessions of friendly fire.

“Of course, I am getting older and age brings maturity and experience,” reasoned Dubois, who turned professional at the age of 19. “I’ve just got to learn from my mistakes. I’ve got all the experience needed to succeed now and it is up to me to apply it, be myself and go out there and just devastate him.

“We’ve been working on a few key things we’re going to use in the fight and it is all a work in progress. We’ve got a gameplan in mind but it is just about feeling it, really feeling it and I’m gonna get in there and make sure I’m on it this time.”

Working away from home, Dubois adds, is something that excites him, as does fighting on a show promoted by the 90-year-old Don King. Muhammad Ali, Joe Frazier, George Foreman, Larry Holmes and Mike Tyson are numbered amongst the heavyweight kings promoted by King.

“No pressure, it is in Miami and that is the place to be. I can’t wait to get out there and put on a show. I am not at all fazed by being the away or home fighter, I am just going to take this opportunity with both hands.

“Those names get you buzzing, you hear them and think ‘this guy is ancient and a legend of the game’. Now we are doing business with him, it’s amazing. It is the way this world works.”

Trevor Bryan v Daniel Dubois on June 11 for the WBA heavyweight championship will be shown live on BT Sport.