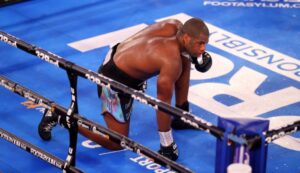 In losing his multi-titled bout to Joe Joyce, Daniel Dubois has since faced harsh criticism from many pundits, news outlets and especially on social media (why am I not surprised).

After taking a knee courtesy from a hard jab from Joyce, Dubois subsequently allowed himself to be counted out resulting in him now being labelled a quitter.

This is most unfair.

After spending the night in hospital, it is reported that Dubois indeed suffered a fractured orbital bone combined with nerve damage around the left eye. He will be in with a specialist on Monday to see if surgery is needed.

Until any naysayer has been in his position with this extent of damage, any harsh criticism should be avoided. Both combatants put up a good show for the many heavyweight titles at stake and at 23, he will come again, maybe even better than before.

For Joe Joyce, he rose to the occasion proving many doubters wrong and deservedly, he will now move on to higher accolades and deservedly so. He came in fitter than before and did not stop doing what he does best.

The bout was expected to be a war of some degree, and they did not disappoint.

Thank you Daniel and Joe for a great fight.