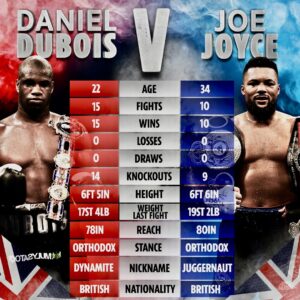 What will probably be the case with a lot of fights due to the possibility of an audience being allowed in venues from October (even if it is 25% capacity), the delayed all British clash between the unbeaten heavyweights Daniel Dubois and Joe Joyce is headed to November (according to the Daily Star newspaper). Whilst this is not official, the October 24th may not happen. Look for it to be delayed.

“For behind closed doors the boxers would have to take less money and you know what the answer is going to be” Frank Warren said (Dubois’s promoter).

“From their perspective, the two fighters, it’s not making them any lesser opponents whether there is a crowd there or not. We want to get bums on seats.”

We pray that it will not be delayed any further as this is one fight that is guaranteed to be electric.