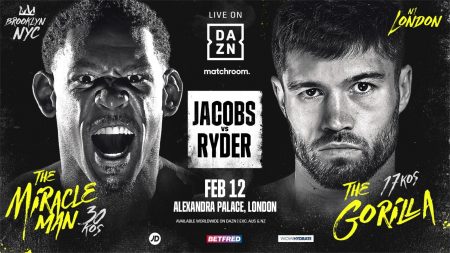 ‘Miracle Man’, who hails from Brooklyn, New York, fell short in his WBC, IBF and WBA Middleweight World Title unification clash with pound-for-pound star Saul ‘Canelo’ Alvarez in May 2019, losing out on all three of the judges’ scorecards, but three years on the 34-year-old still has a burning desire to mix it with the best in the world.

Islington’s Ryder (30-5, 17 KOs) suffered a controversial points loss to former WBA Super-Middleweight World Champion Callum Smith in his one and only World Title challenge at the M&S Bank Arena in Liverpool in November 2019, but the 33-year-old Tony Sims trained-southpaw returned with wins over Mike Guy and Jozef Jurko in 2019 and 2020.

“I’m super excited to be returning to the ring,” said Jacobs. “It has always been a dream of mine to fight in London as a professional, and I’m looking forward to fighting in front of a great crowd. I’m putting my best foot forward on February 12.”

“This is the fight I need to really bring the best out in me,” said Ryder. “Jacobs is a great fighter but he has had his time and now it’s my time to shine! My dreams are at stake on February 12 and destiny awaits. It’s time to get right back to where I need to be.”

Matchroom Fight Pass members will be able to purchase tickets from midday on Monday January 10. Priority ticket info will be emailed directly to eligible members.

General Sale tickets can be purchased via StubHub (www.stubhub.co.uk) from midday on Tuesday January 11.

Undercard details will be announced soon.