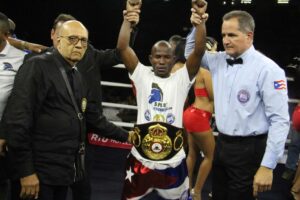 The Cuban champion will make the first defense of the belt. Matellon defeated Erik Lopez on February 7th last year to win the title in Panama, country where he lives.

In fact, this will be the second bout outside Panama in Matellon’s career. He had one fight in Japan and the rest of them have taken place in Panama. The 34-year-old Cuban is an intelligent and uncomfortable fighter who knows what it takes to win a fight. He has faced opponents of different styles and has been able to prevail and achieve good results against all of them.

Argumedo has a longer track record in professional boxing despite being a little younger. The 32-year-old from Tepic has been Minimumweight World Champion in the past.

Since losing his 105-pound belt to the now WBA Light Flyweight Super Champion Hiroto Kyoguchi in 2017, Argumedo has made several fights at 108 pounds and will now have the big opportunity he’s been waiting for in this category. With the advantage of being at home and with the motivation of four straight years without losing, he will try to dethrone Matellon in the event organized by Matchroom Boxing and Canelo Promotions.

Various promotional activities such as press conferences, public training sessions and, of course, the weigh-in ceremony, will take place this week. The fight will be held on Saturday, where Matellon will come with a record of 11 wins, 2 draws, and 6 KOs, while Argumedo will come with 24 wins, 4 losses, 1 draw, and 15 KOs.