Daniele Scardina: I respect Giovanni De Carolis, but I will beat him 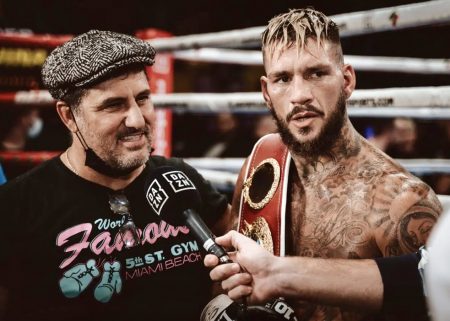 On May 13, at Allianz Cloud in Milan, Italy, Opi Since 82-Matchroom-DAZN will promote a major card with a tripleheader.

DAZN will stream the show live and later on-demand. The tickets are selling fast, mostly because of Scardina-De Carolis which is considered a a super-fight in Italy. Daniele Scardina is very popular in Milan because he is from Rozzano, a town close to Milan, and always lived in Rozzano until a few years ago when he moved to Miami Beach to train at Dino Spencer’s 5th Street Gym. Despite living in Florida, Daniele always fought in Milan in the past 3 years winning 5 consecutive fights in the super middleweight division and the IBF International, the European Union and the WBO Intercontinental championships.

Daniele Scardina built a fan base in Milan and became famous nationally working at successful tv shows like Dancing With The Stars and many magazines wrote about him because of his work in the show-biz industry. Daniele is the most famous boxer in Italy and by a longshot.

Giovanni De Carolis is a more quiet man, who doesn’t talk much and who never wanted to become a show-biz attraction, but in the last couple of months he got a lot of mainstream media attention because he worked in the movie Ghiaccio with some internationally known Italian actors like Vinicio Marchioni (star of many tv series and movies, the most famous being Romanzo Criminale) and Giacomo Ferrara (star of Suburra a worldwide hit on Netflix). Put all this togheter and you will understand why a sold-out is likely at Allianz Cloud which has 5,300 seats.

Daniele, how are you training for this fight?

“I am training twice a day as usual. In the morning I do boxing for two hours at 5th Street Gym while in the afternoon I do one hour and half of athletic training. Recently, I had the opportunity to spar with the undisputed middleweight king Gennady Golovkin. His team put up a training camp in Hollywood, a city one hour from Miami Beach. They needed sparring partners and common friends told them about me. So, they called me and I immediately accepted. With my coach Dino Spencer we went to Hollywood, I sparred with Golovkin and he complimented me! So, we sparred again and then a third time. It was a great experience!”

What do you think of Giovanni De Carolis?

“As a fighter, Giovanni proved to be a champion. As a man, I respect him a lot. I met him when I was in Rome for a tv show and I trained at Italo Mattioli’s gym where he trains too (Italo Mattioli is Giovanni’s coach). Giovanni is a good guy who knows how to relate to people and talking to him was a pleasure. That said, I will beat him on May 13!”

This fight is getting a lot of media attention in Italy. Are you conscious that you are involved in the Italian fight of the year?

“Yes, I do and that motivates me a lot. I would like it if thanks to this fight boxing was more popular in Italy. To sell out arenas again we must bring back people who stopped buying tickets years ago and we must conquer new fans.”

In the last three years you won three championships. Are you satisfied?

“Yes, I am satisfied and I want to keep on winning to reach my goal: to fight for the world championship.”

Are there any opponents that you would like to fight to get in the USA the same media attention that you are getting in Italy?

“I am used to move one step at a time. Right now, my goal is to beat Giovanni De Carolis and I don’t think about anything else.”

USA Boxing’s response to Inside the Games op-ed