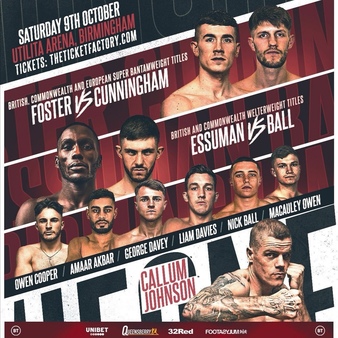 Danny Ball insists he won’t get caught up in the moment when he attempts to wrestle domestic supremacy from one-time sparring partner Ekow Essuman.

The two will clash for Essuman’s British and Commonwealth welterweight titles at the Utilita Arena in Birmingham, live on BT Sport, on Saturday October 9.

They battle for the belts on Frank Warren’s fight under the Queensberry Promotions banner, in what is a golden opportunity for Ball.

Essuman puts up the honours he only claimed in the summer, halting champion Chris Jenkins through a seventh round stoppage.

Ball is also unbeaten, with 10 pro wins and a draw compared to the Chamoion’s 15 victories and no blemishes. The challenger has four TKOs, compared to Essuman’s six.

It’s a voluntary option with those newly-claimed straps to take on Ball, from Kingswinford in Dudley, who has lifted the WBC International Silver bauble himself.

Botswana-born Essuman, who now resides in Nottingham, has a solid grounding from his time as an amateur, where he was a part of the Team GB podium squad.

National success first came his way as a pro with the English crown, which he picked up at the expense of Andy Keates, defending successfully over Tyrone Nurse and Curtis Felix Jr.

Essuman, who has also held the IBF European title, is seven years Ball’s senior at the age of 32, but is considered the favourite. That, it would appear, is absolutely fine with Ball.

He said: “It’s been a hard training camp and I feel good to go. Neither of us has had massive amounts of notice, he only won the titles in July after all.

“The board (British Boxing Board of Control) agreed to a voluntary defence against me in August, we got the date and I’ve been in the gym ever since.

“Just to get the chance to box for the British and Commonwealth titles is a dream come true for me, but I’m determined to bring those belts home. I’ll do everything that I can.

“I sparred Ekow once, we did six rounds, but we still don’t know all that much about each other. I was overweight, that day, and just practised a few things.

“I respect him, I know he’s a good operator who does most things well and they don’t call him ‘the Engine’ for nothing. He’s fast and throws his punches in flurries.

“I know I’m in for a hard night, but I’m not the sort of person who feels pressure. I’m laid-back, I don’t get angry, I keep my focus and listen to my coaches.

“I think the key factor, in this fight, is to stay disciplined. I need to start well, behind the jab, stick to our game plan, be patient and the openings will come.

“At some point, over 12 rounds, there is going to be a time where we are both going to have to stand our ground and let our hands go. We will see what happens then.

“I’m ready to take this step and all I want to do is prove the people wrong who say that I don’t stand a chance. They make us tough in the Black Country!”

Ball points to his own successes as good reasons why he can spring a surprise, having previously walked into a trio of title tests as an unfancied contender.

He pushed Kaisee Benjamin in his first chance, the two playing out a 95-95 draw after 10 keenly-contested rounds, meaning Midlands champion Benjamin hung on to the belt.

It took just three rounds for Ball to then remove the previously-undefeated Mason Cartwright, picking up the vacant WBC International Silver strap in the process.

Another ‘0’ had to go when Ball put that belt up-for-grabs against Sam Gilley, dominating enough to prevail through a unanimous points decision.

He now undertakes his 12th pro outing and is still trained by Richard Ghent and Robert Wright, two ex-pros who have been with him since turning over four years ago.

Ball said: “I’ve been an underdog for the last three fights and not one of them has beaten me. Two of them have been 10-rounders, so I know the distance.

“I got the draw with Kaisee Benjamin. It was his home show, which tells you all that you need to know. Everyone was telling me afterwards that I’d done enough to win. He’s still unbeaten.

“I think I ticked a few boxes against Cartwright. I normally start off slow, but it just goes to show you what timing your punches can do.

“It just showed that I wasn’t scared of fighting away again and that I can hurt my opponents, in tough situations against the crowd. He’d sold about 500 tickets.

“It was a real good fight against Sam Gilley. I had to perform, from start to finish, to beat him, but I felt comfortable enough. That result certainly upset the bookies!

“What we set out to do worked in our favour, I didn’t give him too much space and kept coming forward, which he couldn’t handle. That’s what I will need to do again.”

Ball versus Essuman is part of a bumper night of boxing at the Utilita Arena in Birmingham.

Lichfield’s Brad Foster faces Jason Cunningham for the British, Commonwealth and European Super-Bantamweight championships at the top of the bill.

The show will be aired live on BT Sport and tickets can be purchased at frankwarren.com and theticketfactory.com.