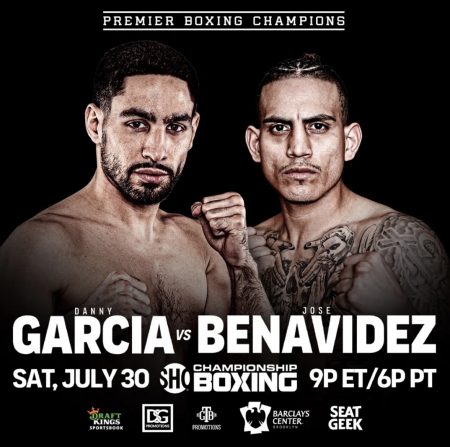 Two-division world champion Danny “Swift” Garcia and exciting contender Jose Benavidez Jr. kicked off fight week events on Wednesday showing off their skills and claiming they would be the better fighter at super welterweight during a media workout ahead of their showdown this Saturday, July 30 headlining live on SHOWTIME from Barclays Center in Brooklyn in a Premier Boxing Champions event.

The workout also featured Polish star and Brooklyn’s all-action Adam Kownacki and Turkish Olympian Ali Eren Demirezen, who meet in the heavyweight co-main event, plus unbeaten rising star Gary Antuanne Russell and former two-division champion Rances Barthelemy, who square off in the SHOWTIME CHAMPIONSHIP BOXING® telecast opener at 9 p.m. ET/6 p.m. PT. While Kownacki is trying to prove he’s still a top heavyweight after back-to-back losses, Russell will endeavor to show he’s an elite talent and a future superstar against yet another proud contender. Russell is also fighting with a heavy heart after his father’s passing on May 23.

Wednesday’s event also included rising prospect Vito Mielnicki Jr., who takes on Jimmy Williams as part of the SHOWTIME BOXING COUNTDOWN show streaming live on the SHOWTIME SPORTS® YouTube channel and SHOWTIME Boxing Facebook beginning at 7 p.m. ET/4 p.m. PT. Fans can also catch up with Mielnicki before he steps in the ring through this revealing DAY IN CAMP feature  on the emerging star.

Also stepping into the ring during Wednesday’s workout was Brooklyn’s Junior Younan, a former amateur star who competes in a non-televised undercard bout on Saturday night.

Tickets for the live event, which is promoted by TGB Promotions and DSG Promotions, are on sale now and can be purchased through seatgeek.com and barclayscenter.com. Tickets are also available for purchase at the American Express Box Office at Barclays Center.

Here is what the fighters had to say Wednesday from world famous Gleason’s Gym in Brooklyn:

“I’m excited to be back at Barclays Center. I can’t wait. I’m here to show the world that I’m ready for this weight class. I feel strong and I want to go in there and make a real statement.

“He’s going to see what I bring into the ring on Saturday. I’ve had the right sparring for this fight and I prepared perfectly. It was really a perfect camp.

“It’s not about weight, it’s about skill. You don’t become a three-time world champion because you’re just bigger. It’s about skill and technique and that’s what we bring to the table.

“The only goal is to get this ‘W’ on Saturday, then we’ll start setting new goals. I expect Benavidez to come to fight, other than that, just expect me to do my thing.

“I’m going to be really strong on Saturday. This is a good weight class for me, especially at this point in my career. There’s a lot of good fighters in the division for me to fight.

“I have more strength, more stamina, I’ve done more sparring because I’m at this new weight class. This is the most rounds I’ve ever sparred in camp. Everything we do, we did it more this camp.”

“I’m coming in with a bang. I take every fight like it’s the biggest fight of my life. I’m excited and I’m ready to go.

“I’m glad that Danny is confident. He’s going to find out on Saturday that 154 pounds isn’t for him. I fought Terence Crawford on one leg and gave him a fight. I know what I’m capable of and I’m going to fight like that.

“I’m not worried about what Danny is bringing. I know what I’m capable of. I trained hard and I’m doing this for my family.

“I feel great fighting at this weight. I’m a big guy. We had a tremendous training camp and I’m extremely motivated. I feel better than ever.

“My leg feels great. The biggest thing with this camp is that I’m happy. For all of these other camps I’m far away from my family but this camp we did it back home in Seattle. I just feel like this is my time to shine.

“My last fight I was trying to do too much, and because of that, I didn’t do anything at all. Everything happens for a reason and I feel ready to fight. I know that I can beat the best at 154, it starts with Danny.”

“It’s awesome to be back fighting at home at Barclays Center. I’m looking to put on a great performance on a big stage on SHOWTIME.

“I’m looking to come forward, attack the body and get him out of there. I’m trying to show the whole division that I’m back. The last couple fights didn’t go my way, but I’m going to show that it was just a bump in the road.

“I lost six percent body fat and turned it into muscle, so I’m feeling great. I want to be the old Adam and take no more steps backwards.

“I’m trying to win the title for Brooklyn. There’s still a lot I want to accomplish in the sport, including one day fighting back home in Poland.”

“I’m here to fight. I’m not here to play around, I’m coming to win. This is a big moment in my career, but I’m going to do everything I can to have my hand raised. I know how important this fight is for my career.

“I said before the Gerald Washington fight that I’m here to stay (which he won by eighth-round stoppage). I want to achieve my dreams in the U.S. After this fight, the fans will know my name even better than before.

“I’m here to be the next great heavyweight fighter. I want to be known worldwide and follow in the footsteps of those who came before me.”

“I’ve fought at Barclays Center before and I try not to overly magnify these fights and opponents, because this is what we do. We live for this, but it doesn’t define who we are. Because it’s what we do, we won’t undermine it’s importance.

“My father instilled a lot of information and wisdom into us. He installed in us  moral integrity and moral fiber and I thank him for that. To keep that going on, that’s a chore that we’ve all taken on. It’s a priority.

“I wouldn’t want to have an unfamiliar person in my camp, so it’s great to have my brother Gary Jr. training me. If I can’t trust the person in my corner, then my fight would be real unfortunate probably. It’s a bittersweet thing, but it makes the transition easier.

“The point of this sport is to hit and not get hit. Rances Barthelemy is a crafty fighter. He likes to lure his opponent into a clean shot.

“My whole objective is to clean out the 140-pound division. That’s the goal in front of us.”

“I feel great here. I love fighting at Barclays Center. You can really feel the Latin heat there. They all come out and support. I love it and I appreciate it. I’m looking forward to this.

“My motivation is at an all-time high. He’s a future star and a quality opponent. My experience will be a factor though. In addition, my endurance and how I approach this fight physically will be key for me.

“This is an opportunity for me to achieve my goal and my dream, which is to make history for Cuban boxing. I’m prepared and I hope everyone tunes in for this on Saturday.

“I have no words to describe how this feels. This is a big responsibility for me, because I fight for Cubans everywhere. This country has been great opening doors for me and I’m thankful that I’ve been able to achieve my dream. At the same time, it is my duty to fight for my oppressed brothers and sisters in Cuba.

“I’m very thankful for this opportunity. I fought a bad fight in 2019 against Robert Easter (in a split draw) and now it’s time for me to redeem myself and give the people the fight they want to see.”

“I’m feeling strong and ready to go. We had a great training camp down in Orlando and got some great work overall. We’re ready for whatever my opponent brings.

“The main thing I learned from my loss is that proper preparation prevents poor performance. You can’t expect to go into a fight with two weeks training and get the best performance. I learned a lesson that I’ll remember for the rest of my career.

“Ever since I got with coach Chino Rivas, we’ve really been on the same page. This is our second fight together and I’m ready to put everything on display.

“I expect to be more explosive and show a high punch output. I’m going to be precise and have a strong defense. I’ll show everything that I’ve been working on.

“I’ve fought in a lot of big venues, but to be fighting at Barclays Center is going to be a great experience and I can’t wait to put on a show.”

“I’m coming to shake the room. This is my hometown. I’m going to make sure this hurts for my opponent on Saturday.

“I feel good and I’m ready. These are the kind of fights I take to stay busy. I’m going to get all the way down to 168 for my next fight. I want to face Caleb Plant.

“The fans can expect fireworks. I’m going to show what I have. I’ve never given myself the full opportunity to show myself in these big moments and I’m just ready to go. As I’ve gotten older I’ve realized how seriously I need to take this sport and I’m ready now.”