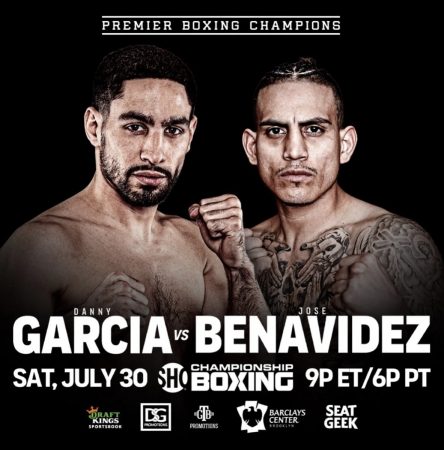 Two-division world champion and Brooklyn fan-favorite Danny “Swift” Garcia spoke of feeling reinvigorated from his time off. At the same time, exciting contender Jose Benavidez Jr. predicted that their super welterweight showdown would be the “Fight of the Year” during a virtual press conference Tuesday before they square off on Saturday, July 30, live on SHOWTIME from Barclays Center in Brooklyn, headlining a Premier Boxing Champions event. During the virtual press conference, the fighters were joined by their respective fathers and trainers, Angel Garcia and Jose Benavidez Sr.

For the former super lightweight and welterweight champion Garcia, this fight marks his extraordinary welterweight debut as he looks to move into contention in the stacked weight division. Phoenix’s Benavidez, the older brother of unbeaten two-time super middleweight champion David Benavidez, can add a signature victory with a win and launch himself into the 154-pound title picture.

Tickets for the live event, which TGB Promotions and DSG Promotions promote, are on sale now and can be purchased through seatgeek.com and barclayscenter.com. Tickets are also available at the American Express Box Office at Barclays Center.

Here is what the press conference participants had to say Tuesday:

“This is my 11th fight on SHOWTIME, and it’s been a journey creating history at Barclays Center or wherever we fight. I’ve been off for a little bit, but I’m back in the gym like I never left. I feel great mentally, physically, and spiritually. I’m ready to give the fans a great fight.

“I have a lot of young guys in this camp here with me, and they keep me on my toes. The hunger that they have gives me that motivation. Boxing is a grueling sport, so you have to find time to have fun. I’m doing that again, and I know that no one can touch me once I’m happy.

“I’ve been fighting at 140 and 147 since the amateurs, for 13 years. I always felt my natural weight was more significant, and I was squeezing down. I feel like this weight fits me well. I feel young and fresh. I’m strong and with a lot more stamina.

“I have a lot of Mexican fans, and they love me wherever I go. I love all the fans from all around the world. The Latinos love my period. When Danny Garcia steps in the ring, he represents all the Latinos.

“I’m going to go in there and fight my fight. I’m not putting any extra pressure on myself. I’m going to fight the Danny Garcia fight. I have to use all my tools and all my skills and get the win.

“I felt the atmosphere at Barclays Center at the Gervonta Davis fight, and I felt what I was missing. I went there to feel that motivation, and it was great. We’ll give everyone a great night, just like that last fight.

“I was in the first main event at Barclays Center, and I’ve built a fanbase there over the last ten years. Brooklyn is the perfect place to build a fanbase, and I’m honored to be a part of Barclays Center’s history.

“I’ve been fighting at the highest level for the last ten years. It’s only right as a human that you would get a little mentally tired. I needed a break so that I could miss boxing. I knew that once I returned to the gym motivated and missing the sport, nobody could beat Danny Garcia.

“You can’t just fight to learn. You have to watch and see these young guys in the gym training. I needed time to feel good again, and I felt great. The results are looking good. When I’m happy, I’m a dangerous man.

“Every fight you learn from. Even when you win, you must take what you can, learn from it, and use it in the next fight. The fight with Errol Spence Jr. was competitive and fun, and we’re ready to move on to the next step.”

“A win over Danny Garcia is a big step for me. The winner of this fight will go back up in the rankings. We’ve both lost before, and I think that’s made us stronger fighters. We’ve learned from our mistakes. We’re going to be throwing bombs all night long. Stay tuned because this will be Fight of the Year, I guarantee that.

“I want to thank Danny for giving me this opportunity. He’s a grand champion, a power-puncher, and I’m ready. I’ve been training hard and prepared to get it on.

“I take every fight as if I’m fighting the best of the best. I don’t focus on the record or anything. I focus on what I have to do. The Puerto Rican and Mexican fans will be out there, and it will be a great show. I’m training hard, and I’d be ready to go tomorrow.

“Danny Garcia is one of the best of the best. I grew up watching Danny and wanted to fight him for a while. I felt like Danny Garcia was a more prominent name than a possible Erislandy Lara fight, so I chose him. This is going to be fireworks.

“I was too focused on trying to knock the guy out in my last fight. I have to stick to my game plan and do what I do best. I feel a lot stronger and more mature now. The knockout is going to come on its own. I will do whatever I must to end the night victorious.

“My last opponent was running and running, and I’m looking forward to going toe-to-toe with Danny. I hit hard, he hits hard, so there’s going to be a knockout whether we look for it. I’m staying in shape, and I’m focused.

“I want to fight the best of the best. I don’t duck or dodge anyone. I don’t care about the record. I train to win. This is an exciting fight with Danny, and it’s a fight the fans will want to see. Danny was the perfect pick for this opponent.

“I know what I’m capable of, and I know what I can do. The most important thing is staying focused in training. I feel like this is the most motivated I’ve been since the beginning of my career. I’m working hard for my daughters. It’s not about me anymore.”

“Danny is perfect for 154 pounds. It’s a new era for him, and it’s time. There’s a time for everything, and our time is now. We have a perfect opponent who will come to bring the fight to us. He’s got the Mexican blood, and we’ve got the Puerto Rican blood, so there will be fireworks on July 30.

“Danny is ready for 154. He’s prepared for all the big names. Many of those fighters talk a lot; well, now we’re here for them. We don’t run from anybody.

“Pay your bill and lock into SHOWTIME on July 30. We’re going to give everyone a show. If not, make it out to Barclays Center because it doesn’t get any better than big fights in Brooklyn.”

“It’s an honor to go up against Danny Garcia and his dad. He’s one of my favorite fighters, but we have to put work at the end of the day. We’ve been working hard because we’ll give the fans what they want. I’m predicting a knockout. We need a dish to progress in the rankings. Jose has not just to win the fight, but he has to look impressive. Both fighters need this fight.

“Danny has a great left hook, and he’s mighty. We’ve seen what he’s done and know what we’re getting into. We’re facing an animal, but we’re ready to give the people what they want.

“Jose Jr. has matured a lot, and he’s ready. He’s motivated to give his kids a better life. When I see how motivated Jr. is, it motivates me too. We’re prepared to show everyone what they want. Someone is getting knocked out.

“I know Danny is coming in very strong, but we’re giving the fans what they deserve. We’re aiming to give everyone the Fight of the Year. We have to be impressive. I know the Garcia’s are training hard, but we need this fight. We have to give it our all.”

“We’re thrilled to welcome Danny Garcia back to SHOWTIME, as well as Jose Benavidez Jr. These are two all-action fighters bringing a great matchup of styles to this bout.

“For SHOWTIME and Danny, this is a bit of a throwback. Almost ten years ago, in October 2012, Danny headlined the first fight card at Barclays Center and headlined for his first time on SHOWTIME. It’s not an exaggeration to say that he’s been instrumental in helping Barclays Center build its profile and establish it as a natural home of boxing on the East Coast.

“Danny is one of his generation’s most exciting and famous fighters. He’s fought, everyone and anyone. His resume speaks for itself. True to form, in his first fight at 154-pounds, he was not looking for an easy argument. And he has a very worthy challenger in front of him in Jose Benavidez Jr.

“Benavidez is a tough, experienced fighter with a lot of experience and many KOs. He’s going to bring a fan-friendly style. These are two exciting fighters who can do it all. With these styles and the intensity they get, this will be one of the most exciting fights of the summer.

“These fighters are trained skillfully by their fathers, with Angel and Jose Sr. guiding their sons their whole careers. Add in Adam Kownacki and Gary Antuanne Russell on the SHOWTIME televised card, and this will be a night full of action and worthy of the high standard SHOWTIME and Barclays Center have set.”

‘D’Animal’ Andrew Robinson will dedicate next fight to his late father NABF & UBSA lightweight champ Jamaine Ortiz soars to no.9 in rankings