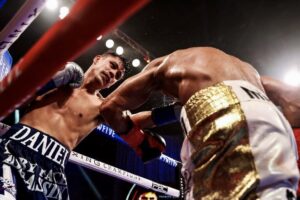 “I don’t take anything away from Payano. “I knew it would be a tough fight. He brought everything he could and I took it, made it a fight and came out victorious.

“He kept on landing his uppercut to the body early, but we adjusted our defense to avoid the shot and tried to pressure. I couldn’t brawl with him, so I had to box and use my distance a little more.

“He was countering me well because I wasn’t taking the distance away. I had to either block or get out of the way. After I started doing that, it worked out and I started throwing combinations. I saw I was hurting him to the body so I kept putting pressure on.

“I was trying to win every round and dominate. The last four rounds my trainer told me to step it up so the same thing didn’t happen that happened in my last fight. That’s what we did. We made the last few rounds convincing.

“We’re at the level and ready to fight the Luis Nery vs. Aaron Alameda winner. I still have unfinished business with Murodjon Akhmadaliev. I want that rematch. If not that, then I’m ready to fight Angelo Leo.

“It’s always good to have your hand raised. I can’t take anything away from Payano. He’s a veteran and he knows a lot of tricks. I had to adjust. It feels good to get a win again and I’m looking to keep that feeling going.”