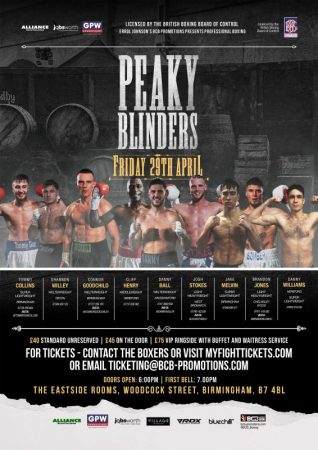 Danny Williams is happy to ‘wing it’ as a professional boxer after making the decision to turn over at the age of 33.

His debut will come when BCB Promotions return to the Eastside Rooms, on Woodcock Street in Birmingham, with fight night set for Friday April 29.

Williams, from Hereford, took up boxing nine years ago, but endured a stop-start amateur career, under the banner of South Wye Boxing Club.

His amateur run contained 13 bouts, with seven wins, before he followed trainer Tony Chadwick, a former coach at South Wye, to the City of Hereford Boxing Academy.

Chadwick will now take him into the pro code, a far cry from Williams’ original sporting aspirations, when he was a winger for Hereford-based grassroots football team Sinkums FC.

The father-of-two, who is engaged to be married to his fiance Charlie and works as a mechanical engineer in a factory, plans to campaign as a super lightweight.

He’s been backed by Studio K Hairdressing, Bamford Building Services, JW Garden Services and the Elite Performance gym, all of Hereford, who have sponsored him.

Williams said: “I wish I’d started boxing when I was younger, I was 24 when I decided to give it a go, just for fitness, and I haven’t really played football since!

“I didn’t take boxing seriously, though, when I was an amateur, and I always seemed to struggle to get fights, so it’s unfinished business for me.

“It’s a burning question to me, whether I can do this, as a pro, and seeing the difference from being an amateur. I think it would have niggled me, if I didn’t find out.

“I’ve got Charlie (fiance) and two fantastic kids in my daughter (Niamh, aged eight) and son (Stan, two), so it’s a happy life, to go along with the boxing.

“I’m definitely a fighter, I come forward and love a tear up, which my coach tells me off about sometimes! We’ve been working on that, getting me to box a bit more.

“It’s in my nature to stand in the centre of the ring and trade, but I’ll have to be smarter than that, particularly in pro boxing. It’s another learning process.

“I know that you don’t play at boxing, but I’m going to enjoy the challenge. I’m 33, I know that I won’t be going out and winning world titles.

“If I could get a shot at a Midlands title, it would mean the world to me, so let’s see where I can get to over the next couple of years.”

Tickets for the Eastside Rooms bill are available, priced at £40 standard or £75 VIP ringside with buffet, directly from the boxers or by visiting myfighttickets.com