Williams (54-29, 41 KO’s) at 47 simply looked awful. He was down in round one from a punch that turned into a stumble and as is the case with most of his fights from the mid 2000’s, he seemed very unsteady with each punch that lands. Ever since his loss to Vitali Klitschko, his resistance to punches has gone, long gone.

Regardless of who is fighting, as soon as he is tagged his legs just go. This has been a tendency throughout his career in his twilight years as a fighter, this is the case whether it’s a powerful heavyweight or a blown up lightweight! Such a shame, I have memories of watching his fight in Reading, ringside against Michael Sprott in 2003 (the first rematch) where he was a broad shouldered strong fighter and far from the motivated and physically primed fighter that beat an old version of Mike Tyson in 2004.

The multi-knockdown shellacking loss he suffered at the hands of Klitschko seemed to take a lot out of him as he appeared to never be the same again, even if he scrapped through and won domestic clashes with Audley Harrison and Matt Skelton. Losing to the pair in rematches marked the obvious decline that he was going through to the sad state of a fighter he resembles today.

The time of the stoppage was 2:25 of round two after Williams was tagged and looking unsteady. It was a very good call from the referee. This was again another loss to a boxer making his pro debut and his retirement is very long overdue.

This fight was held on the Fedor Chudinov vs Umar Sadiq fight card in Russia. 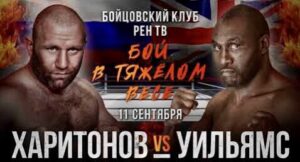