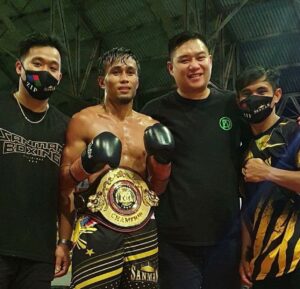 Dave Apolinario won the World Boxing Association (WBA) Asian flyweight title by defeating Charlie Malupangue via fourth round technical knockout in their clash on Thursday at the Tabunoc Sports Complex in Cebu, Philippines.

The 22-year-old Filipino looked superior to his opponent at all times and scored an easy victory thanks to his good performance in the ring. The southpaw fighter became the 112-pound champion of the Asian continent and is beginning to make himself known around the world.

Apolinario reappeared after having made his last fight in November last year and showed that his rise continues vertiginously. It was his fourth consecutive knockout from 2019 so far.

The undefeated fighter improved his record to 15 wins, 10 of them by knockout. Malupangue, meanwhile, now has 9 wins, 5 losses, 3 draws and 6 knockouts.