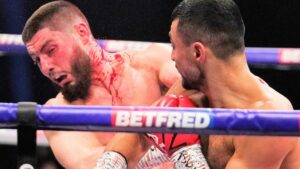 European welterweight champion (EBU) David Avanesyan successfully defended his title by defeating Briton Josh Kelly by TKO in the sixth round on Saturday at Wembley Arena in London, England.

Kelly suffered his first professional loss at the hands of Russian Avanesyan, who obliged Kelly’s coach, Adam Booth, to throw in the towel after two knockdowns in the sixth round.

Fight Notes: Marku was knocked down heavily in round 6. Charlton’s corner threw in the towel to indicate the retirement of Charlton. Time of the retirement was 2:18 of the 8th round.

Fight Notes: Time of the stoppage was 2:29 of the 1st round.