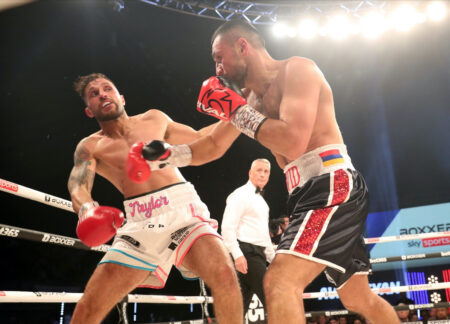 David Avanesyan was on career-best form In the main event, defending his European Welterweight Championship with a second-round stoppage of Liam Taylor and ending the Manchester man’s 13-fight unbeaten streak in the process.

Ironically, Taylor (23-2-1, 11 KO’s) was somewhat responsible for the quick end to the fight, his highly-aggressive approach setting the tone for the encounter and prompting Avanesyan (28-3-1, 16 KO’s) to immediately click up several gears in response.

What followed was a display which which combined animal ferocity and clinical calculation, Avanesyan instantly seeing the angles every Taylor attack opened up and throwing heavy counters down the exposed channels.

A first-round knockdown made it clear the fight would not be going the distance. Taylor recovered, but his minutes were numbered. Avanesyan piled on the pressure in the second round, blasting through Taylor’s defences with heavy hooks which eventually staggered him and prompted the referee to step in and wave the bout off.

With a fourth successful defence of his title completed, Avanesyan called for world title opportunities in his post-fight interview. On tonight’s form, he is more than ready.

Power-puncher Joe Pigford (18-0, 17 KO’s) added to his incredible stoppage rate with yet another early finish, ending Isaac Aryee’s (26-10, 24 KO’s) night in the fifth round and maintaining his KO ratio at an incredible 94%.

Kicking off the undercard, big-hitting Shephed’s Bush cruiserweight Mikael Lawal (14-0, 8 KO’s) wasted no time in halting Switerland’s Benoit Huber (7-2, 5 KO’s) in the third round. Out of the ring for a year,  Lawal was hungry for a stoppage as he looks for a title in his next fight .

Luton middleweight Linus Udofia (17-0, 9 KO’s) halted Xhuljo Vrenozi (17-4, 4 KO’s) in the third round and looks at a title fight in his next fight. Hard-hitting Udofia hurt Vrenozi a number of times throughout before the Albanian’s corner threw the towel in.

Walworth cruiserweight Richard Riakporhe (12-0, 8 KO’s) was in control throughout and dropped Krzysztof Twardowski (9-3, 6 KO’s) in the final round of their eight-rounder with a big overhand right, but the Pole got up and made it to the end.

Riakporhe made his return after nearly two years out after suffering a hand injury and recovering from surgery.  The 31-year-old will be out again on November 20 on a bumper BOXXER at Wembley as he takes on Olanrewaju Duodola for the WBC Silver Cruiserweight title.

Kingston’s Germaine Brown (10-0, 3 KO’s) saw off Jamal Le Doux (8-2, 4 KO’s) but was made to work hard to get the win and now can look forward to a shot at the English title after coming through the Eliminator unscathed. Brown went through his repertoire of skills and won almost every round against Le Doux.

Chigwell flyweight Harvey Horn (8-0, 2 KO’s) outclassed Tanzania’s Adam Yayaha (21-2-6, 10 KO’s) to pick up a Razor Ali remained unbeaten as he claimed a 60-54 win over Stefan Nicolae at super-bantamweight. It was all one-way traffic, with Ali, who lived homeless on the streets of London after fleeing Iran, setting a strong pace throughout.

Portsmouth prospect Ebonie Jones opened her pro account with a win by outpointing the towering Vaida Masiokaite from Lithuania over six rounds, with Jones was on the front foot throughout as she scored her first win in the featherweight division.

Maida Vale super-bantamweight Alireza Ghadiri – otherwise known as ‘Razor Ali’ – won every round of his four-rounder against Stefan Nicolae as he put on a powerful performance to maintain his unbeaten record.