David Benavidez: Proud to be WBC 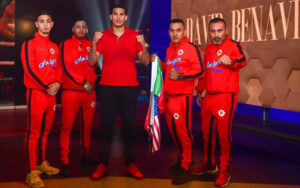 Jose Benavidez, father of two-time WBC super middleweight champion David, known as “Red Flag,” linked up with the specialized press, to talk about the significant victory of his son  against Ronald Ellis, who he defeated by technical knockout in the eleventh round.

David’s father stated that it was a complicated and difficult bout, because Ronald came to fight. However, constant and dedicated work in the gym,  was key to victory,  in this WBC elimination match.

He acknowledged that several things still have to be polished in David’s boxing repertoire, such as the way he cuts the ring and the way he plants himself inside the ring. But he knows that these are solvable factors.

He also assured , that the issue of weight is now history. Due to their pledge and commitment, they were very demanding about it, adhering to a strict diet and training plan, so David can continue fighting at 168 pounds without any problem.

WBC President Mauricio Sulaiman congratulated David and his entire team for their dedication and professionalism. For the past three months they were sending David`s weight graduation without missing any, until the day of the fight with Ronald.

Regarding the fight that many fans want to see against the best pound for pound champion Saul Álvarez, Mr. Benavidez said that “Canelo” is the king of the division, a teacher with great talent and power,  who has earned his recognition and reputation.  If they want to win, they must keep working hard.

He clarified that for now they do not have any contact with Saul’s team,  because they know that he has other commitments. He himself considers that this match could take place at the end of the year or early 2022, with David needing three more fights, to be perfectly prepared.