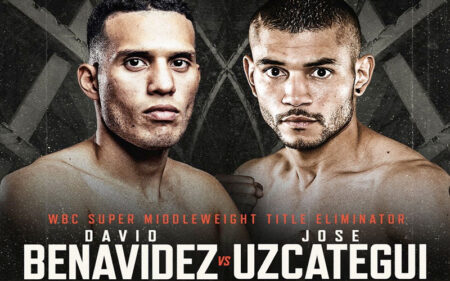 The WBC super-middleweight eliminatory bout, between David Benavidez and José Uzcategui, originally slated for August 28 at the Footprint Center in Phoenix, Arizona, had to be postponed due to a positive COVID-19 result from Benavidez.

The fight, presented by PBC, is now scheduled for November 13 at the same location and will be broadcast on Showtime.

Most recently, he earned knockout victories over Roamer Alexis Angulo in August 2020 and Ronald Ellis in March of this year. Benavídez is trained by his father José Sr., along with his brother and former title challenger, José Jr. In 2017, he became the youngest super middleweight champion in boxing history by defeating Ronald Gavril aged just twenty.

Born in Venezuela and fighting out of Tijuana, Mexico, Uzcátegui (31-4, 26 KOs) captured a 168-pound world title in March 2018 by stopping veteran Andre Dirrell after eight rounds. The 30-year-old fighter put himself in position to fight for a title with four consecutive knockout victories from 2015 to 2016, including a win over then-undefeated Julius Jackson.

Since he lost the title to undefeated champion Caleb Plant in January 2019.  Uzcátegui then rallied to win three of his last four fights, including 2021 knockout victories over Jaime Hernández López and Josué Obando.