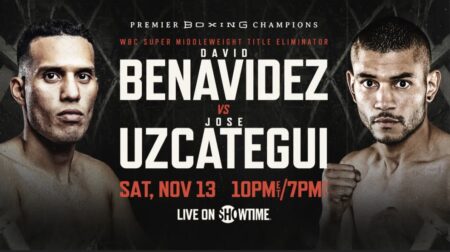 Here is what the fighters had to say Monday:

“I’m going to be the same fighter I always am, ripping the body and looking for the knockout. I like a fast-paced, action packed fight. The fans are expecting it, so there’s no reason to change my style now. No one has ever stopped Uzcategui, but that’s the statement I’m trying to make.

“I’m going to go in there and do what I always do. I’m always looking for a spectacular knockout. That’s just the way that I train. I put my heart and soul into camp. No matter what fight might be on the horizon, it doesn’t change the way I prepare for a fight.

“Every time I go to sleep, I’m thinking about war on November 13. I’m gunning for the knockout, and if I have to go through a war to get it, then that’s what’s going to happen.

“Uzcategui is a strong fighter. If I can’t get the stoppage, I want to get a very clear victory. I’ve got a great game plan and I’m prepared to bring a lot of different styles into the ring. I know this isn’t an easy opponent, but that’s the kind of fighter I want to be. I want to take on the toughest challenges.

“We’ve had a lot of great sparring sessions out here in Southern California with Gabe Rosado and Diego Pacheco. I’ve been going up to 14 rounds in sparring sessions, so I’m not even worried about my stamina at all.

“There’s no anxiety about fighting at home. I’m just excited about it. I’ve worked very hard for this. It’s going to be a great night of boxing, and I can’t wait to share the card with my brother in the co-main event. It’s really a dream come true.

“My main objective is to go in there and stop him. I’m the best super middleweight in the world and I just have to show everybody why.

“I know he’s coming to knock me out too, and that’s going to make it a great fight. It’s huge for both of us to get this win and get to the next step toward a title.

“I feel like the winner of this fight deserves the Canelo-Plant winner. We’ve definitely put the work in throughout our careers to earn it. I think Canelo has the experience and power that’s going to help him get the victory on November 6 over Plant.

“I’m doing 13 or 14 rounds of sparring and running six or seven miles a day right now and I’m feeling strong. I basically had two back-to-back camps with the delay, so it was a little bit of a blessing in disguise.”

“I’m very motivated to work hard and train hard every day. If David doesn’t think I’m a top-level fighter, then that’s fine. I’m going to show him in the ring. Whatever misconceptions he has, we are going to figure it out in the ring and I will show the kind of work that I have put in and the type of opponent that I can be.

“What happened with Caleb Plant was just a bad night. We prepared in the wrong way and we weren’t ready like we should have been. But on November 13, the people are going to realize that the Plant fight was just one bad night and we will work extremely hard to become victorious.

“I’m not going to tell you that I’m going to get the knockout or that I’m going to stop him or anything like that, because David is a young, strong, talented fighter who is capable of anything, just like I am. I’m going to provide my own speed, my own talent and my own experience. So in the end, the winners on November 13 are going to be the fans.

“I can guarantee you that we will provide fans with a great fight and that people will realize the type of fighters we are. I promise I will make the most out of this opportunity and give the fans what they deserve.

“I truly believe that the winner of this fight between me and David deserves to fight the winner of Canelo-Plant. No doubt about that. As far as that fight goes, I think Canelo is going to win, and he may even knock Plant out in eight or nine rounds.

“This could be the Fight of the Year, I can tell you that. The fans can expect a war between me and David. I know it’s going to be tough, but it’s going to be a real entertaining fight that the fans will love and we are going to put on a show for them.”