David Benavidez vs. Kyrone Davis on Showtime this Saturday 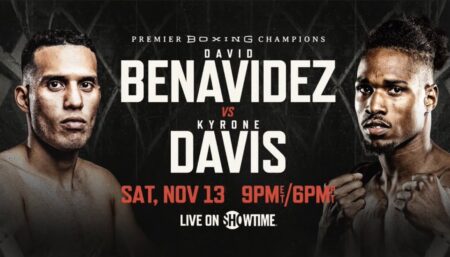 Benavídez was originally scheduled to face former world champion Jose Uzcátegui, who was forced to withdraw due to a failed pre-fight drug test.

Still just 24-years-old, Benavídez (24-0, 21 KOs) enters this fight having knocked out his last four opponents, including a September 2019 knockout of two-time super middleweight champion Anthony Dirrell. Benavídez is trained by his father José Sr., alongside his brother and former title challenger, José Jr. In 2017, he became the youngest super middleweight champion in boxing history by defeating Ronald Gavril on SHOWTIME at just 20 years old. Representing his native Phoenix, Ariz., and returning to fight there for the first time since 2015 on November 13, Benavídez went from a 15-year-old prodigy sparring with Gennady Golovkin and Peter Quillin, to world title contender with a 10-fight knockout streak from 2015 through 2017, including a highlight-reel knockout of Rogelio Medina with a seven-punch combination that earned him his first title opportunity.

A native of Monmouth, N.J., Davis (16-2-1, 6 KO) most recently won an exciting September clash against Martez McGregor, triumphing by decision after eight action-packed rounds. Davis had previously been impressive against the toughest test of his career, as he fought two-time super middleweight champion Anthony Dirrell to a split-draw in February. It was the 26-year-old’s debut at super middleweight, after beginning his career at middleweight. Davis had won five of his six previous outings heading into the Dirrell clash. He is trained by renowned coach Stephen Edwards in Philadelphia, alongside former unified world champion Julian Wiliams.

Tickets for the live event are on sale now and are available for purchase through Ticketmaster.com.

Fighting out of Los Angeles, California, the 29-year-old Myrthil (17-0, 13 KOs) discovered boxing at age 18, after his family relocated from Haiti to the United States. Following a stellar amateur career, Myrthil made his pro debut in January 2017 with a second-round TKO over Allan Varela in Tijuana, Mexico. In September 2019, he won an eight-round unanimous decision over Jonathan Steele in Las Vegas. The performance caught the eye of Floyd Mayweather, who sat ringside for that bout and ultimately signed Myrthil to his Mayweather Promotions outfit. Most recently, Myrthil outpointed Johnny Rodriguez over eight rounds in February 2020.

Originally from Memphis, Miller (21-2, 6 KOs) now resides in Las Vegas and also fights out of the Mayweather Promotions stable. The 28-year-old veteran’s list of accomplishments includes wins over former champions Jamel Herring and Jezreel Corrales. Miller will look to get back on track after his 12-fight win streak was snapped in his most recent bout, a points loss to unbeaten contender Michel Rivera in October 2020.