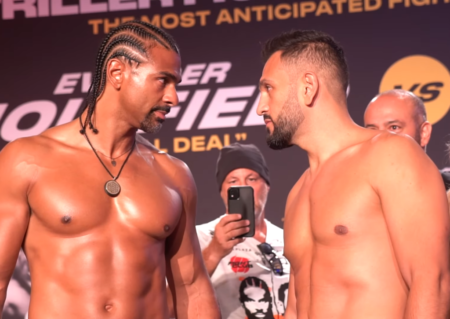 David Haye, Joe Fournier, Jono Carroll and Andy Vences were all in fantastic shape on the scales as they weighed in ahead of Saturday’s big event.

The Triller Fight Club event takes place this weekend at the Seminole Hard Rock Hotel and Casino in Florida, and will be broadcast live on Fite TV, with Fournier going up against Haye, while Carroll takes on Vences.

The weigh-in took place on Friday, and saw Haye tip the scales at 211.5lbs, while Fournier came in 16lbs lighter, as he weighed 195.5lbs. The two friends turned rivals then took part in an intense stare down, with Fournier again claiming he would earn a first round knockout.

Carroll came in bang on the limit for his showdown, looking in tremendous condition as he weighed 130lbs, and his opponent Vences came in marginally lighter, weighing 129.4lbs.

Fournier said: “David Haye is a decreasing asset. He’ll say he’ll do these things, but he’s now the 40-year-old David Haye with a torn Achilles, and a torn bicep. I’m not stupid, I know a decade ago he would win, but now he won’t.

“He’s like a Corvette. He’s got brutal power, is fast and can only go in one direction. I see myself as a Rolls Royce. I’m defined and more expensive. He’ll see where elegance beats brute power.

“Now I’ve seen him up close he doesn’t look as big as he used to. I think I’m going to put it on him straight away and knock him out in the first round.”

Haye said: “There is only one way to settle this. Get in the ring and let the punches flow. Joe is a friend, and I don’t want to do horrendous damage to him, but it’s hard to do this sport without doing damage.

“We’re going to throw punches, and I punch significantly harder and faster than Joe. It’s not a business transaction, it’s life and death. All the slick analogies will go out of the window when the bell rings.

“There are levels to this boxing game. I’ll turn up the heat gradually and I believe he’ll quit in the corner. He’ll think what have I signed up to. But we’ll see how much punishment he can take.”

Carroll said: “I’m very excited and this has been a long time coming. In the last camp I had sacrificed a lot just to be there. I had a premature baby in hospital at the time, but thankfully they’re strong now. I had to leave and grind and sacrifice everything.

“With boxing if you don’t make the sacrifices then your dreams will become the sacrifices. The time is now here and I will show my skills to the world, and it’s great to be doing it on such a massive platform. I was watching these names when I was growing up as a kid, and just to be on stage with men like this is brilliant.

“It will be a very technical fight for the first few rounds. Both of us have a good understanding of the game. It will be a chess match at times and be rough and rugged at times, but I I fancy a TKO victory around round six or seven.”

“I’ve heard what Carroll has to say, but I’ve been in the gym grinding every day. I come to every fight the same, whether it’s Carroll or someone else, I prepare like this is the best guy. My dad ingrained that in me, and it doesn’t matter who I’m fighting.

“It all depends on how Jono takes the power. A lot of people overlook my power. It will be competitive as I’m fighting a guy that has experience. I’m not going in there with someone who doesn’t know that they’re doing.

“I’ve been with my new trainer for around 14 months now. We’ve just been training in the gym that entire time waiting for this chance, and you’ll see a totally different Andy than what you’ve seen before.”