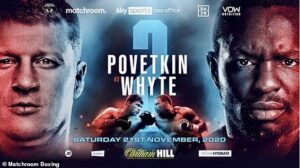 With the rematch only just a month away, the talk is now increasing as the intriguing return between Dillian Whyte and Alexander Povetkin is happening on November 21st.

Ahead on points and down twice, Povetkin seemed destined for defeat before a left hook detonated on Whytes’s head that left him clean out for the count (and more). That’s boxing, but will that happen again?

Some call it a “lucky punch,” not David Haye who manages heavyweight Derek Chisora:

“It’s a very dangerous fight and it’s a fight that I think Dillian doesn’t want to accept it was nothing other than a lucky punch. He thought, ‘I was winning the fight’, which he was, ‘I had him knocked down twice in the fourth round and I was winning the fifth round until I got hit by one shot and that was it’. Anything can happen in boxing, it happens in the heavyweight division,” Haye told Sky Sports.

“I don’t think that’s the mindset you need. You can’t say, ‘You won because it was an anomaly’. That left uppercut that he threw knocked out Carlos Takam, in a very even fight, in a very good toe-to-toe fight. It’s a shot that he throws regularly. Derek was telling me when he sparred with him, he was getting hit with that shot, so it’s one of his shots, and to get hit with someone’s best shot isn’t very lucky is it.

“The guy has got a big shot. It’s like getting caught with Dillian Whyte’s left hook. You know it’s there if you can practice to go under it, if you throw your right hook to the body or not, or you can stand up and get knocked out.”