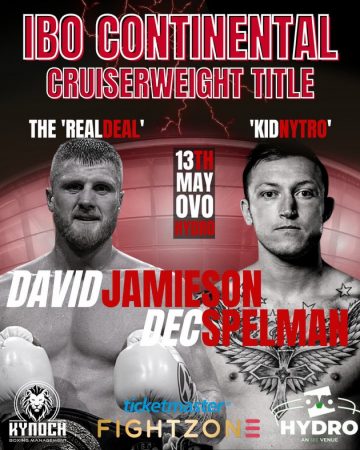 Scotland’s David Jamieson will get the toughest test of his career on a historic night of boxing at Glasgow’s OVO Hydro Arena on May 13, with all the action broadcast LIVE by Fightzone.

Topping the bill with be Scotland’s first-ever women’s world champion, Hannah Rankin, defending her WBA and IBO World Super Welterweight belts versus aggressive Mexican fighter, Alejandra Ayala, in what will be an absolute war. Hannah will also make history again on the night by becoming the first female fighter to headline a major boxing promotion ‘North of the Border’.

The undercard features some of Scotland’s best talent – including Commonwealth Featherweight Champion Nathaniel Collins defending his belt against Wales’ unbeaten Jacob Robinson – and has now been bolstered by big-punching cruiserweight Jamieson against England’s Dec Spelman.

With just one early career defeat – to top-rated Mikael Lawal – in nine fights, East Kilbride’s Jamieson has earned himself the tag as one of Britain’s hottest 14st 4lbs prospects with some devastating performances, including five big KOs.

In February, the 30-year-old moved up the world rankings by picking up the IBO International Cruiserweight Title with a 10 round win over tough Swede Samo Jangirov – and it’s this prize he will put on the line against Englishman Spelman.

Also 30, Spelman will be a true litmus test for Jamieson to see if the Scot really does have the makings of a future star. A former English light heavyweight belt-holder, Dec has lost just five of 22 and, crucially, has the valuable experience of sharing a ring with some of the UK’s best fighters including Anthony Yarde and Lyndon Arthur.

“This is absolutely my toughest test – this is a huge step up and it’s what I’ve been asking for,” explained the Scot.  “It’s domestic opposition and it’s going to show just where I’m at.

“Dec is well know on the British circuit and this will be a real good scalp if I beat him. Anthony Yarde has fought at the top, is very heavy-handed and is the only guy to stop him, so this is a proper fight and it would be a right statement to stop him too.

“I’m a big cruiserweight though and ten rounds is a long time. I’m the bigger, physically stronger man and in the middle and later rounds it will get heavy weather for him.

“I can’t wait, it’s a massive show for Scotland. I’m just a few miles down the road, so I’ll be taking a few coachloads and we’ll take the roof off the place!”

Tickets for this event are in high demand and can be purchased at ticketmaster.co.uk (Pre Sale 10am Wednesday March 30 and on General Sale from 10am on April 1st).