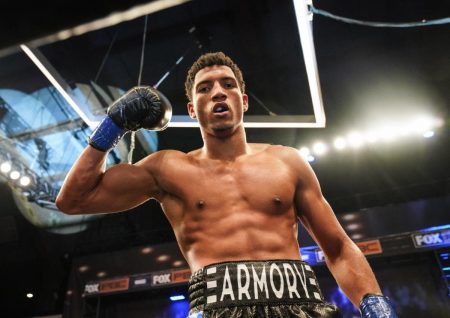 Undefeated super middleweight, David Morrell Jr. (6-0, 5 KOs), who holds the WBA title, has his eyes on the main event this weekend between David Benavidez vs. David Lemieux, Saturday on Showtime.

“I am watching Benavidez vs. Lemieux carefully this weekend on Showtime” said Morrell. “I want the winner, and I am not being shy about it. I feel I am the best fighter in the division, and it is clear that no one wants to fight me. So, I have to call people out because I am so heavily avoided.”

Morrell, who has been out of the ring since his destruction of veteran Alantez Fox last December, has put a target on David Benavidez’ back.

“I saw that Benavidez mentioned my name with Jermall Charlo and Caleb Plant, well I’m hear to let him know that I’m not afraid of him like these guys are, I’m ready to fight him anytime, anywhere,” continued Morrell, who resides and represents the Twin Cities of Minneapolis, Minnesota. “If Benavidez dares to step in the ring with me, it will be like when his brother Jose got wrecked by Crawford. There’s going to be another Benavidez on the deck and his name is going to be David, not Jose. I’m putting a target on Benavidez’ back, I’m aiming to take him out.”

Morrell has been fast-tracked since turning pro, and despite only having six fights, has already capture a world title.

“I came to America to challenge the best fighters in the world like I did internationally in the amateurs for my countrymen of Cuba,” concluded Morrell. “When Benavidez and I step in the ring, it will be a monumental showdown, a fight everyone will be clamoring to see. I’m going to knock him out cold and establish myself as the next superstar in boxing.”