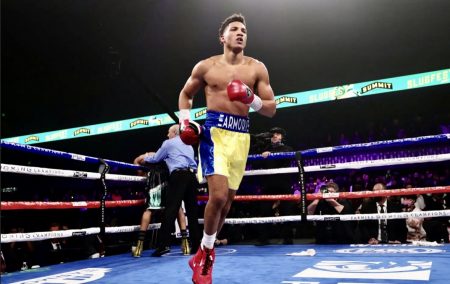 WBA Super Middleweight Champion David Morrell Jr. delivered another knockout in front of his adopted hometown crowd as he stopped Alantez Fox in the fourth round of the FOX PBC Fight Night main event and on FOX Deportes Saturday night from The Armory in Minneapolis.

The 23-year-old Morrell (6-0, 5 KOs), a prolific Cuban amateur who found a home in Minneapolis after turning pro in 2019, scored his second-straight knockout victory in front of his hometown fans, following up a first-round destruction of Mario Cazares in June on FOX.

“I love fighting here in Minnesota,” said Morrell. “This is a great opportunity to fight in front of my fans here. It really motivates me.”

Morell stepped up in competition again on Saturday, facing the durable veteran Fox (28-3-1, 13 KOs), a test he passed in emphatic fashion. Morrell and Fox spent much of the early rounds tied up on the inside, as Fox looked to slow down the offensive-minded Morrell.

Fox had success in avoiding the vaunted straight left hand from the southpaw Morrell, ducking it and tying up consistently in the early rounds. While Fox was able to avoid damage across those first few rounds, Morrell was able to land an efficient 46% of his power punches throughout the action, according to CompuBox.

“I was just listening to my team and following their instructions,” said Morrell. “We were just working in there, just like we do in the gym. They told me to let my hands go, so I did. Fox didn’t have the power to keep me off of him. So I knew that I had to take advantage of it. I felt comfortable in there and that made it easy for me.”

In round four, Morrell broke through with a left uppercut during another tie-up on the inside, landing flushly and putting Fox on the canvas. Morrell immediately upped his attack rate and stalked Fox around the ring, continuing to fling power punches and eventually prompting Fox’s corner to throw in the towel 2:06 into the round.

“I thought I won the first round, and in the second round I knew he was going to come out aggressively,” said Fox. “So I was trying to move and make it tough for him. We were holding each other on the inside and he came in with a good shot that dazed me. I was upset about the fight being stopped, but I know that my team has my best interests at heart.”

Morrell quickly set his sights on the rest of the elite 168-pound fighters.

“I respect everybody in the super middleweight division, but I want to fight all of them,” said Morrell. “I’ve got this belt right now and I’m open to fighting any of them. They just have to step up.”