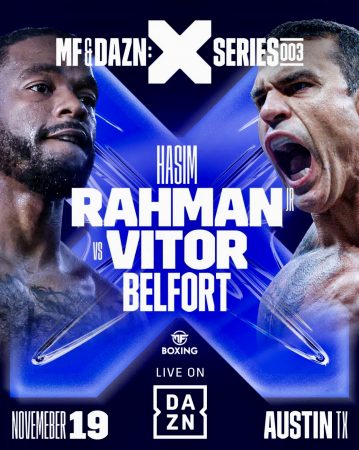 MF & DAZN: X SERIES 003, powered by Misfits Boxing, will take place on 19 November at the Moody Center in Austin, Texas, and boasts a HUGE main event between Hasim Rahman Jr. and Vitor Belfort.

The November 19 fight night will be available both live and on demand to all subscribers around the world on DAZN. Ticket details will be released soon. Visit MisfitsBoxing.com for more info.

Rahman said: “I’m really looking forward to fighting Mr. Belfort on Oct 15th. I’m extremely grateful to Misfits Boxing for giving me the opportunity and I look to make the most of it. I’m 100% focused on making a lasting impression on all the fans in England and those watching at home. Now the world gets to see why Fake Paul and his sister want absolutely nothing to do with getting in a ring with me!”

Belfort said: “I’m excited to showcase my skills on October 15 in Sheffield, live on DAZN! I have been waiting for a fight for a while, and now is my time. I’m always in the gym staying ready. Rahman is a perfect opponent for me, so expect fireworks in the return of the Phenom.”

“It is great to be able to announce the third show in our MF & DAZN: X Series, and our first in the U.S.,” said Joseph Markowski, CEO DAZN North America. “We are super excited about these shows; their reach and their potential to excite and entice a growing new generation of fight fans. Stay tuned for more shows and more big names to be announced soon”.

President of Misfits Boxing and CEO of Proper Loud, Mams Taylor said: “We’re always looking at providing our fans with huge events, and that includes those all over the world. I’m so excited for a huge night in Texas, even more so with a headline between two dangerous men in Belfort and Hasim Rahman. Misfits Boxing keeps moving forward; London, Sheffield and now Austin confirmed. We’re just getting started.”

“America needs no introduction when it comes to its stature for putting on the biggest and best events in sports and entertainment as well as the passion of the fans,” said Kalle Sauerland, Head of Global Boxing at Wasserman Boxing. “It’s exactly why we’re heading out there, to give the world the best crossover boxing events available. This time, the headline is a frightening one, between two men who are coming with dangerous reputations. We have a former UFC champion going up against a man who has boxing running through his veins. Belfort vs. Rahman Jr is confirmed, and Texas better be ready for a fiery encounter.”

Ortiz vs. Lozano: Weights from Philadelphia Malik Scott: You’d be crazy to rule out Joshua against Fury