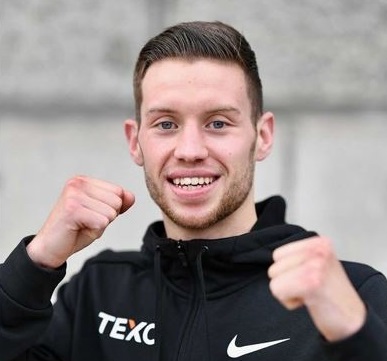 Under the Fightzone cameras on this Fight Academy and Sam Kynoch event, Dean Sutherland lived up to his top prospect tag with a fantastic performance in an action-packed battle with Italy’s Michele Esposito.

Fighting in his home city against a former Italian champion, ‘Deadly’ Dean (pictured) certainly gave the crowd and Fightzone viewers their money’s worth in this contest for the World Boxing Council (WBC) International Silver Welterweight Title.

In the first round, Esposito tried to get on the front foot but the Scot stayed composed, picked his shots well and landed with eye catching uppercuts.  It was toe to toe in the second with Sutherland landing the harder shots but getting caught himself with a couple of uppercuts that rocked his head back.

Round three was a torrid affair for the Italian, almost out on his feet and hit clean with a multitude of powerful punches, Esposito toughed it out and made it through the three minutes.

Round four was fantastic action, with both men playing their part. It was hard to watch at times as Sutherland began to pummel Esposito without reply, only for the visitor to come back and have his own success at the end of the round.

Esposito had a better round five, trapping the local man on the ropes and pounding away, and again refused to be deterred in the sixth.

How Esposito got through seven was unfathomable; he was punched from pillar to post but, just as it looked like he might be stopped, managed to throw something back. The end came in round eight though with the extremely brave Italian just taking far too many clean punches, forcing referee Victor Loughlin to step in and wave it off.

Sutherland, 23, is now 12-0 (4) and moves up the international rankings. The 35-year-old Esposito returns to Lombarida with a 18-5-1 (6) ledger, having been stopped for the first time in his career.

After suffering his first loss in July, Macduff’s Billy Stuart got back to winning ways with a sixth round stoppage of Spanish-based Romanian Alexandru Ionita. Scheduled for eight, Stuart softened his opponent up in the second round with body punches, before eventually wearing down the East European with hard shots and constant pressure, forcing a corner retirement.  Still just 23, Billy ‘The Butcher’ proved he’d learnt from his earlier defeat, moving to 11-1 (4). The game Ionita is now 7-10-1 (5).

Callen McAulay wasn’t able to better his 2018 result against Angel Emilov, 10-35 (6), with the pair going the distance again over six rounds. Renfrew’s McAulay was a clear winner against Bulgaria’s Emilov but the contest produced few fireworks. Southpaw McCulay, 8-0 (2), hadn’t been in the ring since March 2019 and will be glad to have shed the ring rust, picking up a 60-54 verdict from the referee.

After a two-year ring hiatus, Craig Morgan used his height and reach advantage to successfully negotiate the always tricky assignment that is Brett Fidoe. Coming in on the back of two wins, Fidoe, 15-66-5 (7), applied pressure but was often chasing shadows as southpaw Morgan danced around the ring. It wasn’t always one-way traffic, Worcestershire’s Fidoe had his moments but Morgan moved to 8-0 with a shutout 40-36 victory.

Luca ‘The Magician’ Micheletti moved to 4-0 (1) in an entertaining super-middleweight four-rounder against hard man, Slovakia’s Michal Gazdik 6-16 (4). Micheletti gave the crowd plenty of excitement as he elected to trade with Gazdik, and took a few heavy knocks in return. At the final bell, the engineering graduate from Nairn ran out a 40-36 winner.

In the show opener, Limerick’s Edward ‘Dominator’ Donovan threw just about every punch in the book, beating tough Scouser Steven Floyd in a four rounds welterweight contest. The Liverpudlian was down from a body shot in the fourth but managed to see it through. Both men were 1-0 coming into the fight.