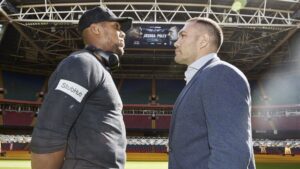 Anthony Joshua vs Kubrat Pulev is still seemingly headed for December 12th and hopefully at the O2 areana, even if at this point with COVID-19 on the rise, it seems unlikely.

“Yes, December 12 at the O2 is the plan for AJ,” Eddie Hearn of Matchroom Boxing said.

But Pulev’s co-promoter, Ivaylo Gotzev is not so convinced as there has been much reported talk of Joshua vs Tyson Fury (for all the heavyweight belts).

“[The Joshua-Fury] door will be closed with a lawsuit if they break our deal and our contract. There are some very good attorneys in England and some very fair courts, so it will come down to whether they want to decide whether they want that or not. I do believe AJ and his promoter will do the right thing and do as they say and finalise the deal” Gotzev said to Press Box PR.

“Through blood sweat and tears Kubrat earned his position to challenge AJ. Will they overrule his rights, can they all overrule his rights? That’s entirely up to them if they want to try that. They should respect the rules of the IBF. There’s a signed agreement.

But it does appear progress is being made. Once this fight is out of the way, and assuming Joshua wins, he will be free to take on Fury. Ah, hold on, it is not as simple as that. There is the WBO mandatory position to be accommodated with Oleksandr Usyk in that position (he is scheduled to fight Dereck Chisora IF Chisora will fight without a live gate).

“We are in the final stages of closing the deal, which we are extremely happy with. We’re adjusting the original contract and it’s finally going in the right direction that keeps both sides happy. It’s now up to [Joshua’s promoter] Eddie [Hearn] to conclude their part. Our signature will come a lot easier than theirs. To become a champion you must go into foreign lands and conquer and that’s what Kubrat has decided to do. That’s where the win will be the sweetest and the most legitimate. Let’s do it in London.

So fingers crossed. The heavyweight ‘situation’ one moment becomes clearer (with Dillian Whyte losing his position as WBC mandatory being KO’d by Alexander Povetkin with the WBC not enforcing for 12 months the mandatory fight) then another hurdle appears.

Back to Gotzev and his fighters tactics if/when the fight happens:

“We’re going for the knockout. Kubrat is a man’s man. He has heart, skill. talent and he’s going to upset the apple cart. The question is: is AJ a man or is he still a mama’s boy? Kubrat is the big underdog, it’s like a Rocky story. AJ is a physical specimen, he’s like Apollo Creed and we’re bringing in Rocky. When he upsets AJ that’s the end of Matchroom’s reign.”

Even with a good amateur pedigree and excellent professional record, Pulev seems unlikely to upset the apple-cart. But always with boxing, and especially with heavyweights, mind that banana skin!