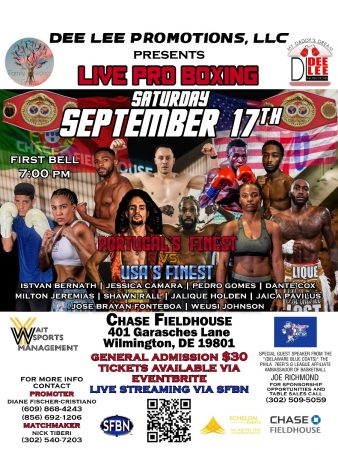 This sensational fight card features many of boxing’s young up and coming international talent on the hunt to make their mark in the world of professional boxing. Fighters from Portugal, Hungary and Canada have big dreams and each believes Wilmington will be a big step in accomplishing those dreams.

In this first ever Professional Boxing Promotion at The Chase Fieldhouse, two exciting bouts share the top honor as Co-Main events. Jessica ‘The Cobra’ Camara (8-3-0/0 ko’s) fighting out of Portugal by way of Canada, will make her second attempt to win a World Super Lightweight Title when she takes on a really tough Jaica Pavilus (3-6-1/0 ko’s) coming to Wilmington from Port-au-Prince, Haiti by way of New York. Camara came up short in her first title shot losing a hard fought 10 round split decision and this time around, she’s looking to walk out of the ring with the belt. Delaware’s knowledgeable boxing fans won’t be fooled by either fighter’s record, as it’s common knowledge in boxing circles, that these women fighters fight wherever and whomever is put in front of them…period.

Lightweights Pedro ‘The Black Panther’ Gomes (10-3-0/2 ko’s) of Porto, Portugal and Dante ‘The Red Cornet’ Cox (8-2-0/5 ko’s) out of Germany by way of Glen Burnie, MD share the other co-main honors. Gomes is coming a long way to showcase his talents but he’ll need to be on top of his game, since Cox is a southpaw with power, as witnessed by his impressive knockout record.

Undefeated Istvan ‘Hungarian Hammer’ Bernath (10-0-0/10 ko’s), the number one ranked Hungarian heavyweight, heads up this exciting undercard of young Turks. Boxing fans worldwide crave the kind of one punch destruction that distinguishes the heavyweight division from all others and Bernath is that kind of heavyweight. The Hungarian Hammer has that power and more, so be in your seats fight fans, because when the bell rings for this one, there’s going to be Thunder!

The young talented undercard will include Portugal’s Milton ‘The Prince’ Jeremias (4-0-0/2 ko’s) looking to remain undefeated, for the 3rd time in the USA, when he takes on Bedford, Ohio’s Shawn Rall (2-6-0/2 ko’s) in an exciting 4 round welterweight matchup. This will be Rall’s 4th fight this year, so it seems he’s in a hurry to climb back in the ring as often as possible. Also appearing on the undercard are, Jalique Holden (1-0) and Weusi Johnson (3-22) both of Wilmington, DE and Philadelphia’s own Adonis Wilkins looking forward to making his Pro Debut.

A pair of Chester, PA fighters round out this undercard. Both Middleweight, Frankie Lynn (1-0) and heavyweight, Tony Young (Pro Debut) have big plans, but for each of these young talents, those plans have to go through Wilmington, DE Saturday night, September 17th, 2022. This is the moment Wilmington and Delaware have wished for, so get your tickets early! Doors open at 6:00pm First bout slated for 7:00pm

Sponsorship’s and Chair/Table Ringside sales can be purchased by contacting Joe Richmond 302.509.5059.