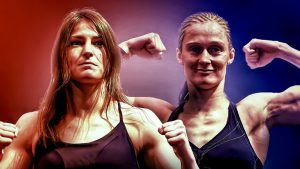 So finally it is here and time for two ladies to sort out their differences. In this case it is who is the best fighter and righting the wrong from their first match in June of last year that most people believed Katie Taylor was fortunate to win.

When scores are that close, and they could easily have gone the other way, a rematch is the best action. Saturday will decide, I just hope there is a clear winner. I see it close again.

“I think she don’t gonna fight with me,” Persoon said Tuesday. “She gonna box another way. But yeah, we’re gonna see Saturday.”

“Everybody have their style of boxing, I can also box.…but if she don’t come, you have to – there is one that have to take the initiative to make a nice fight. So, if the other one don’t come because she wants to go turning around, left and right, then there’s one that has to come from the front. Also, it’s my style to come in front, but I can also box on the other side. It’s how the other fighter fights how you make your fight.”